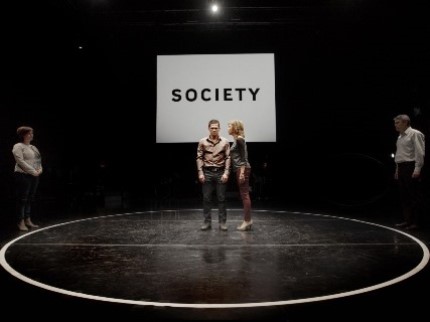 Kretakör - New ways of theatre as examples of democratic education?

Against the background of social and cultural developments in Hungary, Árpád Schilling gave us an overview on the development of Krétakör, a former Hungarian theatre company which today is active as a civil society foundation. On the one hand, his presentation illustrated the various lines of conflict characterizing the Hungarian society under right-wing politician Viktor Orbán today. On the other hand, specific emphasis was given to the position of independent and critical civil society initiatives in today’s Hungary.

Krétakör has been a very successful theatre company in the first phase of its existence until 2009. During this period classical plays were staged in a modern and interactive understanding of theatre. At the peak of its success director and initiator Árpád Schilling decided to re-define the work of Krétakör and turned the company into a foundation- the second phase of its existence. Since 2009 Krétakör is now active as a foundation successfully implementing projects such as debate theatres between Roma and non-Roma communities in small Hungarian villages or free schools for the promotion of civic and democratic engagement of young people. Schilling’s presentation of this second phase of Krétakör however finished with a black picture of a falling person entitled “2014: The Black Year”.

Although the importance of projects implemented by Krétakör became very obvious during Schilling’s presentation, its open critique of the government has led to a total cut in funding.

In the meantime, corruption scandals and internet taxes have led to protests against Orbán and seemed to represent a setback to the popularity of the Prime Minister. How the social and cultural situation will develop remains to be seen, how Krétakör will proceed is unknown. In any case, more media coverage and attention to the polarized situation in Austria’s neighbouring countries is necessary.