Evaluation of the project “Where from? Where to? Myths – Nation – Identities” 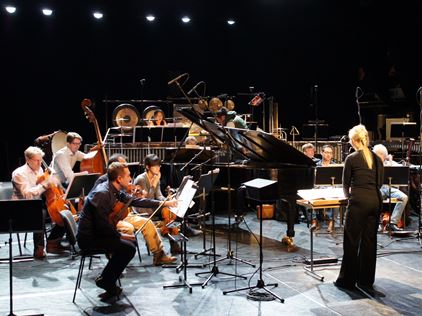 Within the evaluation, focus groups were implemented in Munich and Prague and several qualitative interviews were done in spring 2015. Staff from the Goethe-Institute, the Ensemble Modern and participants in the project reflected on the conception, goals and impacts of the project Where from? Where to? Myths – Nation – Identities. The next steps in the evaluation include a report and a presentation of the results in Prague in Mai.

Evaluation of the project “Where from? Where to? Myths – Nation – Identities”

Against this backdrop, the next-generation music talents from Central Eastern Europe was approached by the Goethe Institute, with young composers artistically reflecting on the topic. Together with experts in the cultural sciences, critics, the composer and conductor Peter Eötvös and the Ensemble Modern, the young composers approached the theme on theoretical and practical levels. The resulting works were premiered by the Ensemble Modern in Germany and Central Eastern Europe throughout 2014.

Subject of the evaluation by EDUCULT are the goals and impacts of the project Where from? Where to? Myths – Nation – Identities. It will be analysed which outcomes the project had on the individual as well as public level; which impact it had, for instance on the individual participants or which impression it left with different audiences. To this end a range of qualitative interviews will be made with project representatives and participants and two focus groups will be implemented, one in Munich, one in Prague. In addition, central project documents are analysed.

Is measuring essential?
Scroll to top