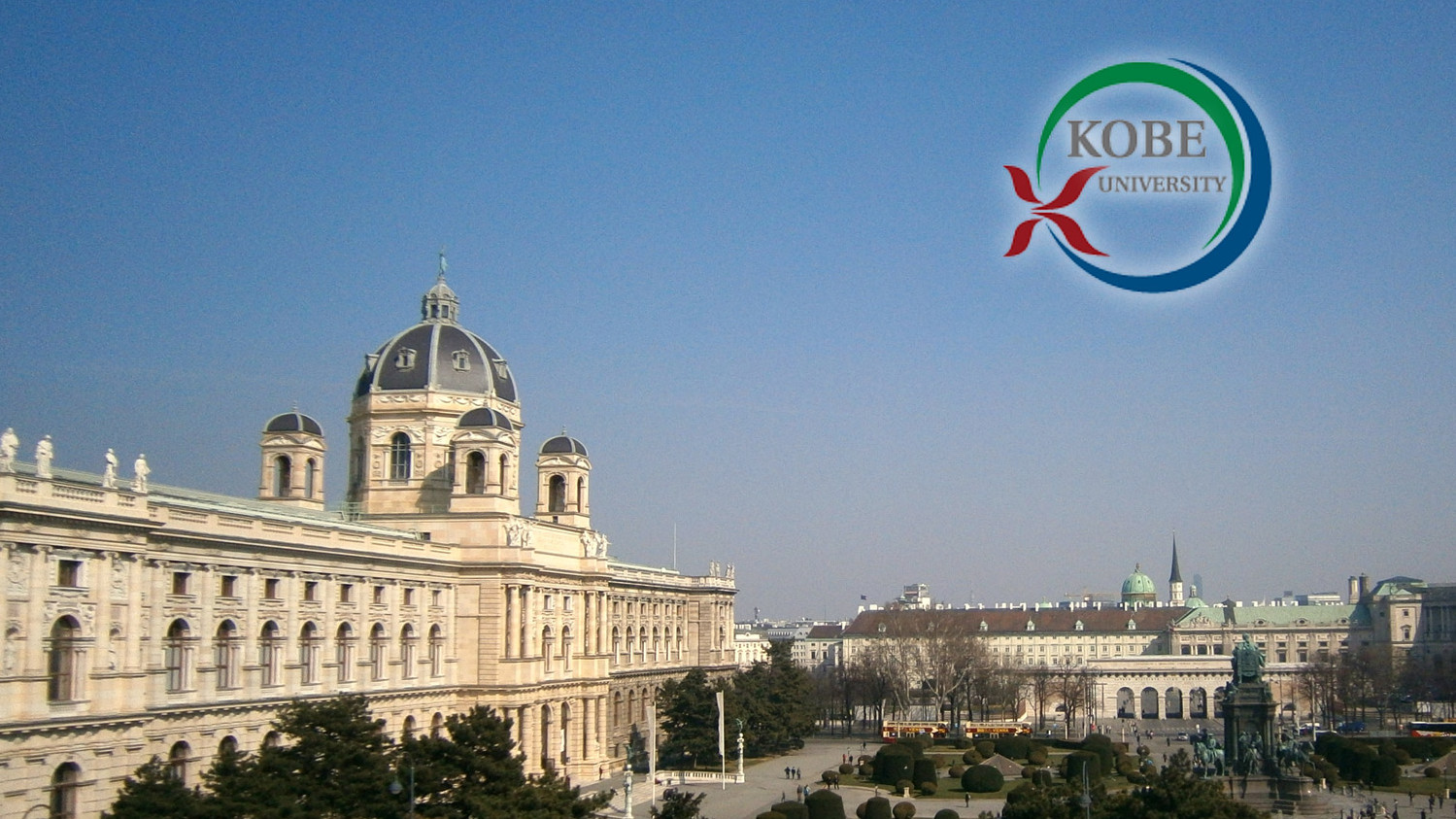 From the 12th to 22nd September 2019, thirteen students from the Kobe University/Faculty of Global Human Sciences came to Vienna on a ten-day study trip focused on the topic of "New cultures - new politics. Challenges for cultural management and cultural policy in demographically and politically changing environments". EDUCULT was commissioned with the programming and organisation of the Summer Academy and offered the prospective cultural managers practical content with a diverse selection of speakers and in-depth visits to cultural institutions.

In September 2019, a group of students of the cross-sectional subject Cultural Management/Cultural Policy at the Kobe University/Faculty of Global Human Sciences are going to visit Vienna to participate in the Summer Academy organized by EDUCULT.
Artistically colourful and diverse between the poles of high culture and community-based, participative offers, Vienna can point out numerous mastered as well as still to be solved tasks in the field of cultural participation. The aim of this study trip is to explore regional and international similarities and differences in cultural-political issues and implementation possibilities in a perspective of cultural exchange.

Under the topic “New cultures – new politics. Challenges for cultural management and cultural policy in demographically and politically changing environments” students will gain insights into the local art and cultural scene from a cultural-political, mediating, organizational and curatorial point of view. The topic of art and cultural policy will be considered from a broader social perspective, also taking into account the role of the cultural sector in dealing with social change and cultural participation.

EDUCULT conceives and organizes this year’s program of the Summer Academy in Vienna and is looking forward to exciting discussions and insights!

We started the Summer Academy 2019 after a welcome meeting at EDUCULT with a guided tour through two independent cultural institutions in the Q21/Museumsquartier Vienna, where Clemens Scott gave us insight into the work of Broken Rules and we met a Polish writer from the Artist in Residence program.  Afterwards we visited mica – music Austria, where the director, Sabine Reiter, told us about her work in supporting the Austrian music scene and gave us a guided tour through the house. In the evening, we made our way to the Heurigen Zawodsky, where we officially welcomed the group with late summer weather, as well as with local specialities and wine to get to know each other better. 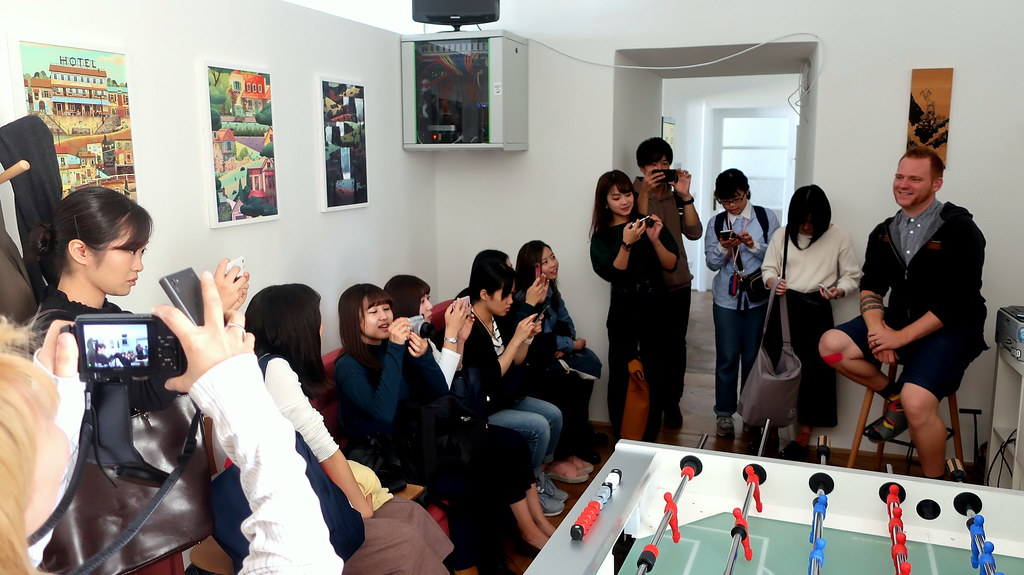 On day two of the Summer Academy we listened to a lecture, then followed by a discussion with Constanze Wimmer (Kunstuniversität Graz) about current developments in music education. Later, we took a guided tour through the city centre of Vienna. After lunch at Yppenplatz and a short tour of the Brunnenmarkt, we made our way to Sandleiten, where Ula Schneider (SOHO in Ottakring) told us about this year’s 20th anniversary celebratory art project and festival. We also enjoyed a guided tour through the Sandleitenhof. The day ended with a ballet performance at the Vienna State Opera. 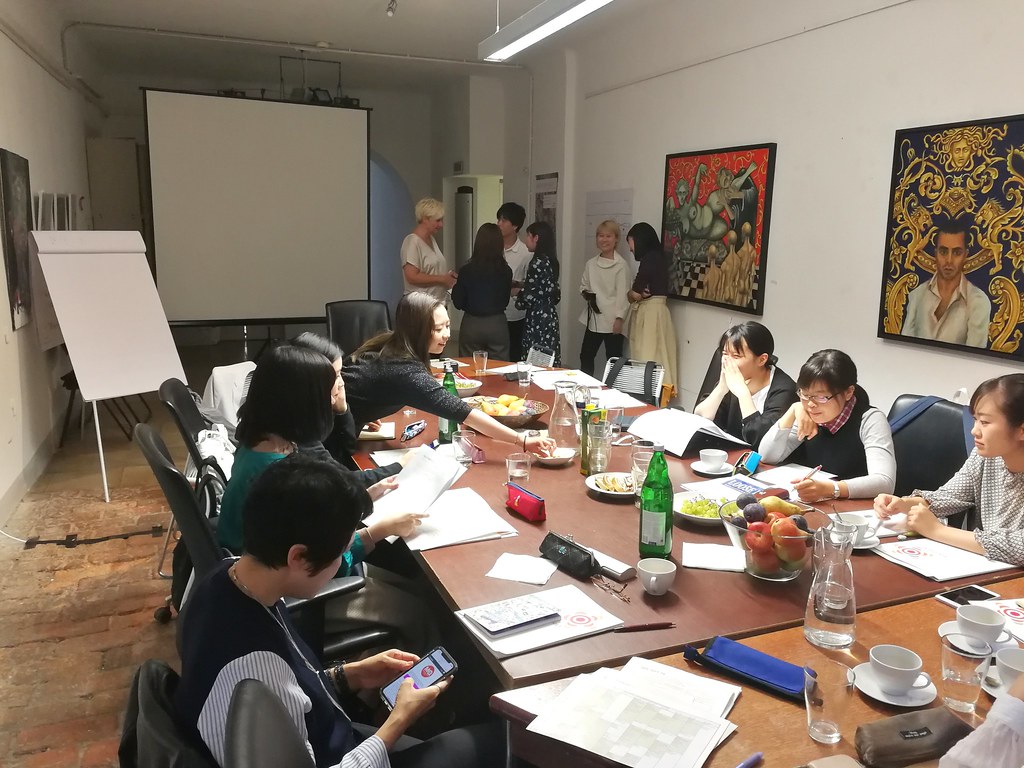 On Sunday, we began slowly at noon with a guided tour through the Kunsthistorisches Museum. While there, we got an insider view into the Kunstkammer and its extraordinary objects and experienced the subtleties of Dutch painting. We spent the afternoon in the Café Eiles, where the students could try different Viennese pastries and cakes (Sachertorte!). 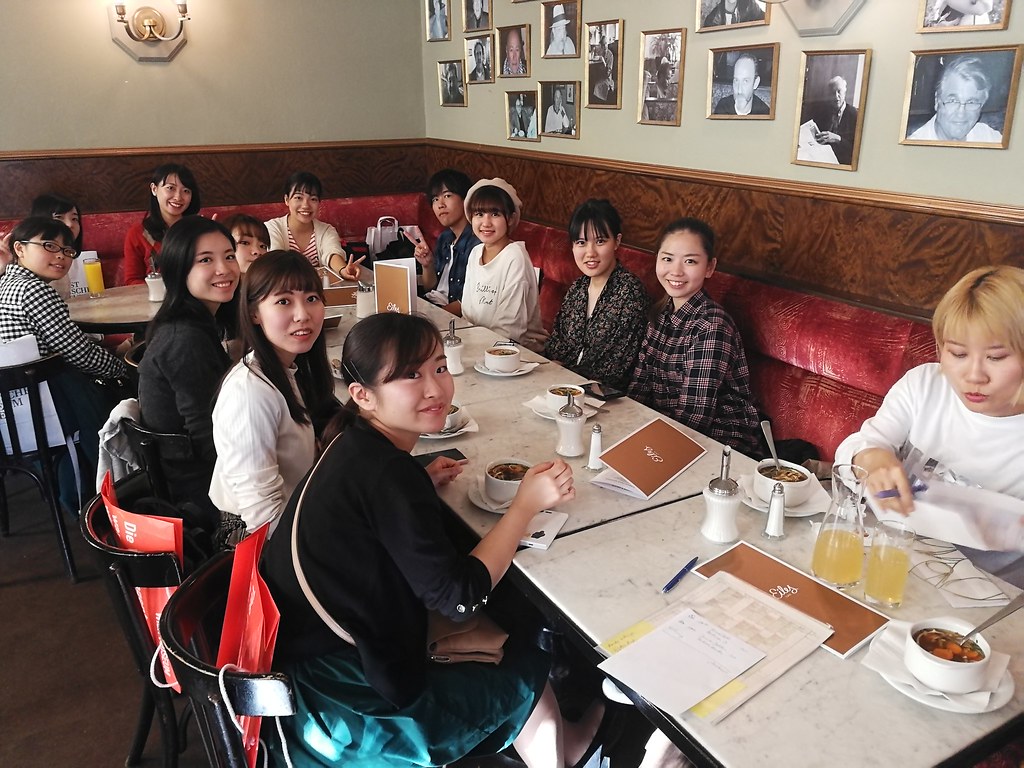 We began the new week with a round table on “Conceptual approaches to cultural policy in Austria”, featuring Dagmar Abfalter (Institute for Cultural Management), Yvonne Gimpel (IG Kultur), Monika Mokre (Academy of Sciences) and Michael Wimmer (EDUCULT). Afterwards we made our way to Brotfabrik in the district of Favoriten, where, after a lunch break in Magda’s canteen, we were given a guided tour through object 19 and the work of Caritas revolving around community work. Afterwards, we had a round of talks with Udo Felizeter (Open piano for refugees), Tilman Fromelt (Object 19/Stand 129), Suna Orcun (Superar) and Martina Adelsberger (Libraries of Vienna), who told us about their work. In the evening we visited the Volksoper Vienna, where we saw Mozart’s Magic Flute. 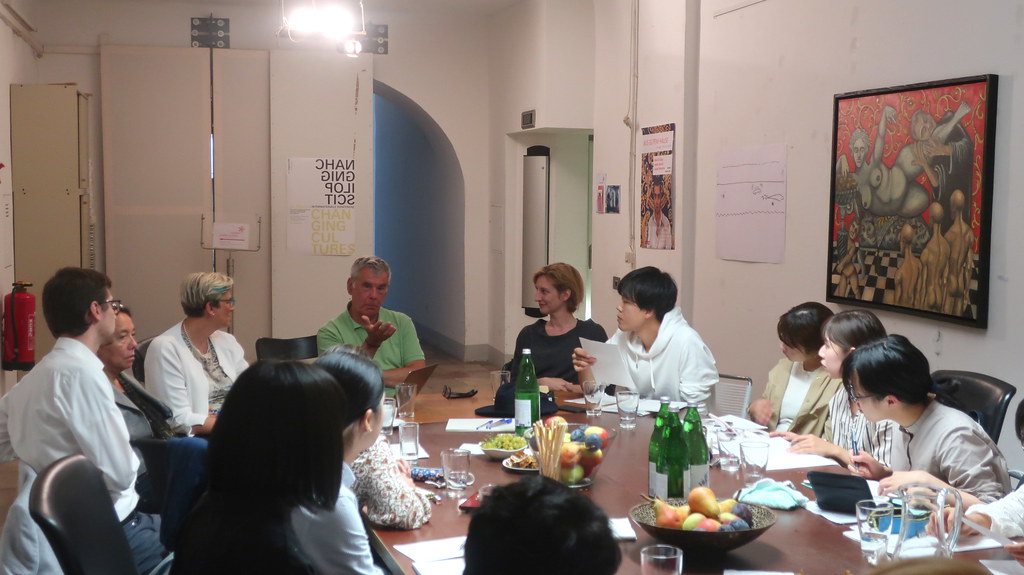 In the morning Michael Wimmer began with a lecture and discussion about cultural policy in different European cities. Then we had an exciting round table discussion with leaders from the Viennese festival scene: Christoph Thun-Hohenstein (MAK Vienna, Vienna Biennale), Magdalena Zelasko (LET’S CEE Film Festival), Karin Hoffmann (Wir sind Wien.Festival), Martina Laab (Salam Orient) and Michael Stolhofer (ImPulsTanz). Afterwards Gerald Wagenhofer from the Burghauptmannschaft Vienna gave us a highly interesting “backstage” tour through parts of the Vienna Hofburg that are usually hidden for most people. In the evening we visited the Vienna Biennale for Change at the MAK which dealt with artificial intelligence and sustainability. 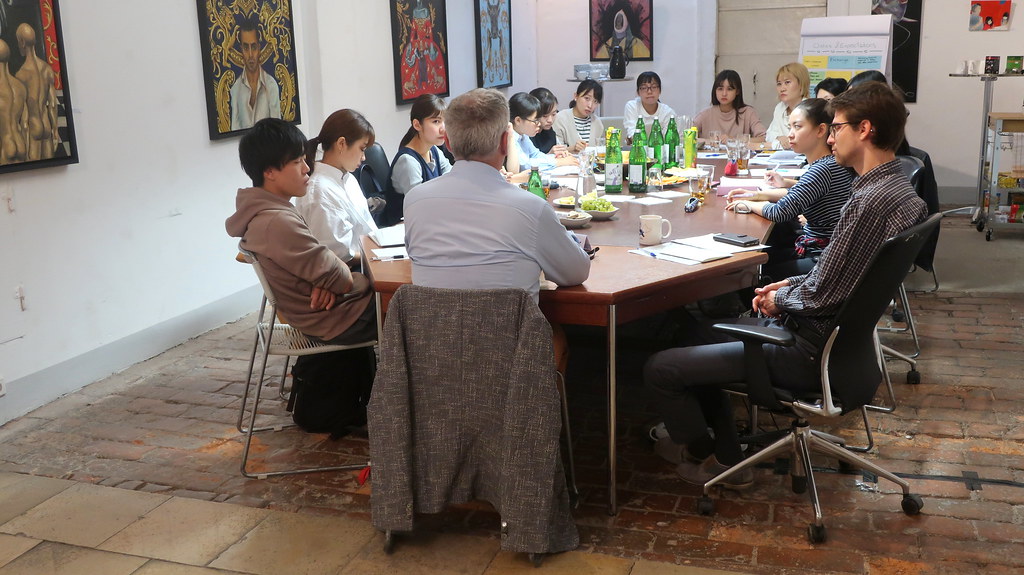 In the morning we had the opportunity to attend a rehearsal of the play “The Flying Dutchman“(Der fliegende Holländer) at the Vienna Volksoper. Back at EDUCULT, Clemens Költringer (Vienna Tourism) held a lecture about marketing strategies specifically concerning cultural tourism in Vienna. After the lunch break we had an inspiring discussion about concepts of participation and audience development in dance and performance with Liz King (dancer/choreographer), Claudia Heu (performer), Rio Rutzinger (ImPulsTanz) and Katalin Erdödi (Board of Trustees for Theatre, Dance & Performance). We then travelled to the Clock Museum, part of the Wien Museum, where Nathaniel Prottas, head of the department of cultural mediation, told us about the museum itself and its mission and current projects in mediation work. In the evening, we were fortunate to watch the dress rehearsal of the piece “Twelfth Night or What You Will”, performed by students of the DiverCityLab in the Dschungel Wien. Exhausted and fulfilled we finished the long day with dinner at Café Leopold – after several days of exploring the Central European cuisine, our guests were delighted to enjoy Japanese food. 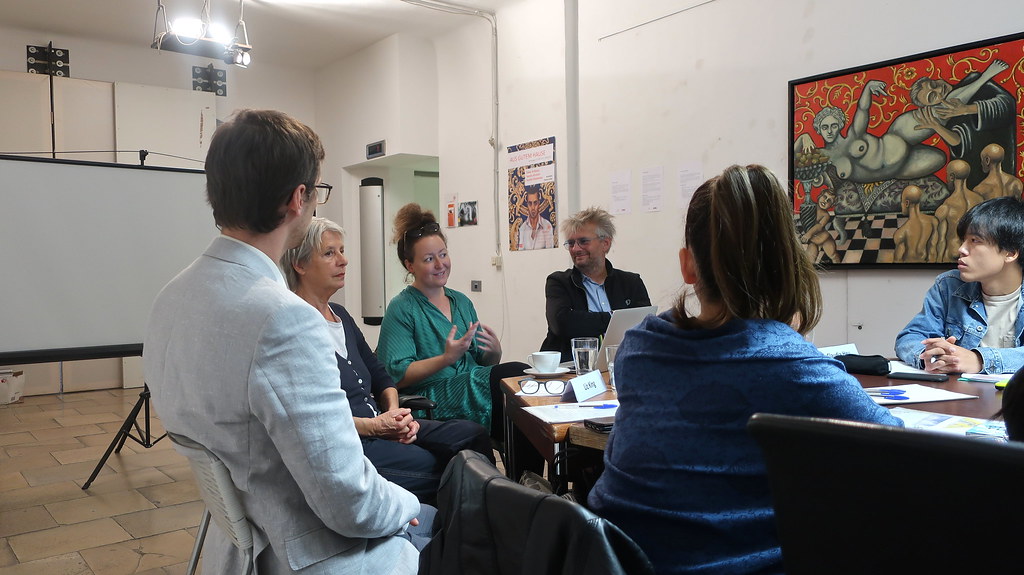 The day began with a meeting with Jörg Wolfert, cultural mediator at mumok, where he told us about the work of his department and guided us through the museum from a mediatorial and curatorial perspective. Afterwards we had time to look at the exhibitions. Following a short break, we met Corinne Eckenstein (Dschungel Wien), Elisabeth Menasse-Wiesbauer (ZOOM Kindermuseum) and Monika Jeschko (Kultur für Kinder/Kulturschultüte) for a panel about cultural offerings for children. After lunch we went to the WUK (Werkstätten – und Kulturhaus), where Regina Picker toured us through its premises and told us about the different institutions and developments present there. Directly after that we drove to the Literaturhaus. Anna Zauner introduced us to her work and then showed us the institution. In the evening the group attended the anniversary concert of Jeunesse in the Great Hall of the Vienna Musikverein. 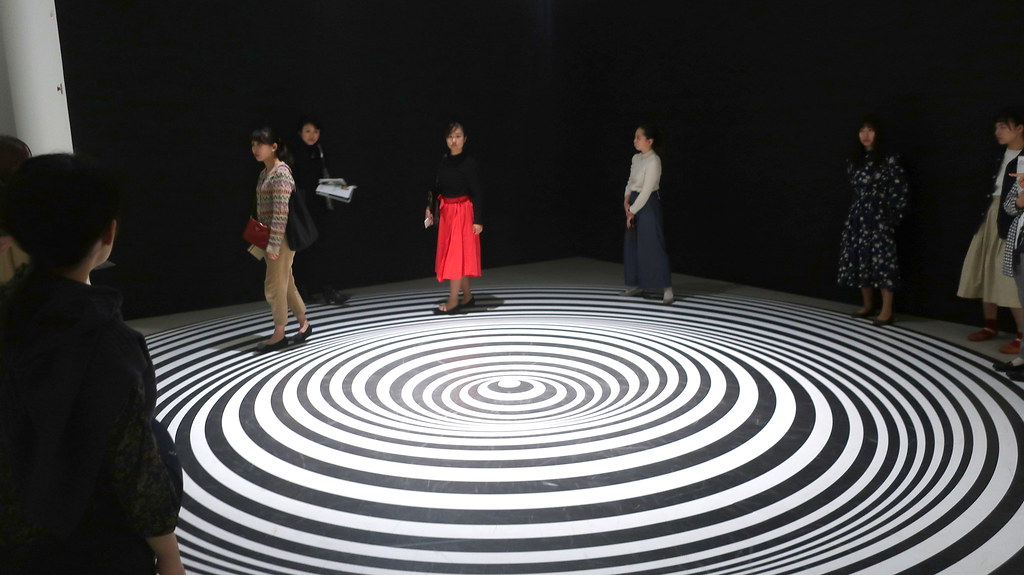 On Friday we visited exil.arte, where the founder and director Gerold Gruber led us through the house and gave us intriguing insight into the stories of lost music and musicians during the Third Reich. Afterwards we went to the Volkstheater, where Constance Cauers, Malte Andritter and Franziska Kuen told us about their (mediating) work at the Young Volkstheater – at the end we were even invited to a short theatre workshop where we gained perspective into the practice. Afterwards the students had a few hours to explore the city on their own and/or prepare their presentations for the next (and final) day. In the late afternoon, we met again in the Vienna Konzerthaus. While there, Matthias Naske told us about the history of the house, and its diverse approaches to audience development in one of the largest concert halls in Vienna, followed by his work as artistic director. At the end we enjoyed a concert of the Vienna Philharmonic Orchestra in the Great Hall of the Konzerthaus. 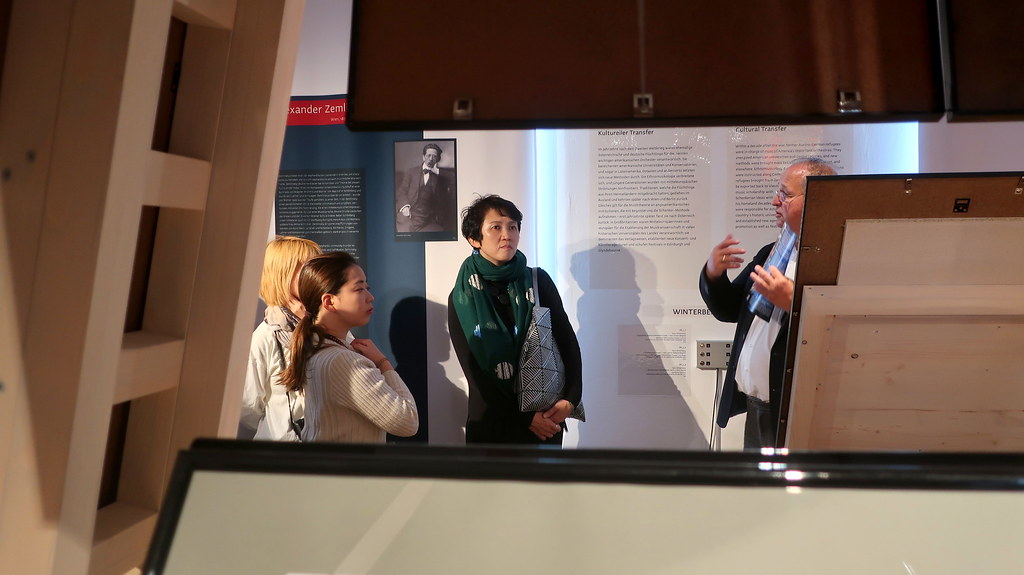 On their last day in Vienna, the guests had some free time before we met for the last time at EDUCULT. In small groups, the students gave presentations on their findings concerning questions of cultural mediation, cultural policy and cultural participation, also considering comparisons between Japan and Vienna. Afterwards, we reflected together on the Summer Academy and reviewed the past few days. As a farewell we spent a nice evening together in the traditionally Viennese Mozart’s Restaurant. 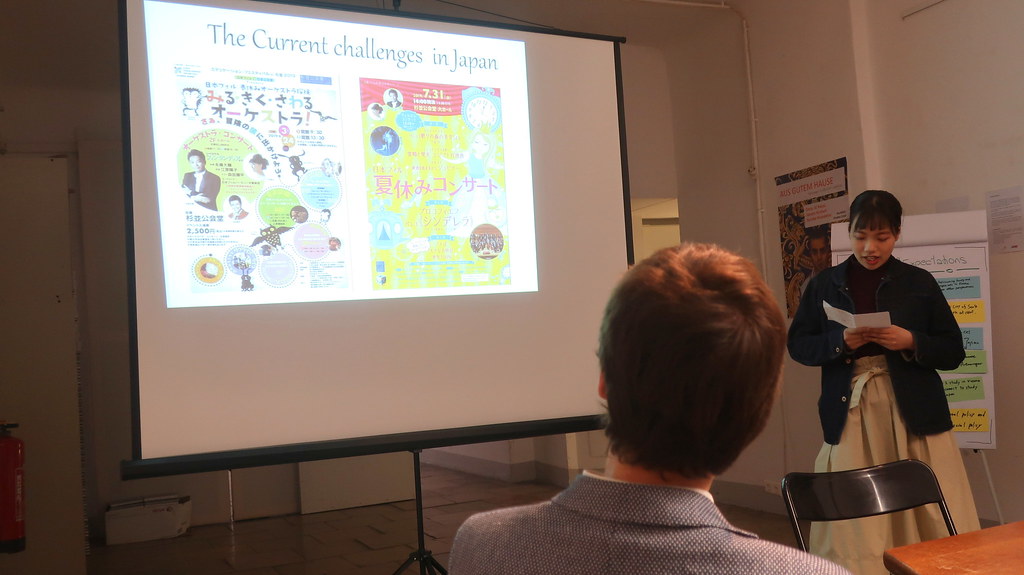 We were very happy to welcome the group to Vienna and to introduce them to a small piece of our city and its vibrant cultural life.

It was nice to meet you and we wish you all the best for your future!