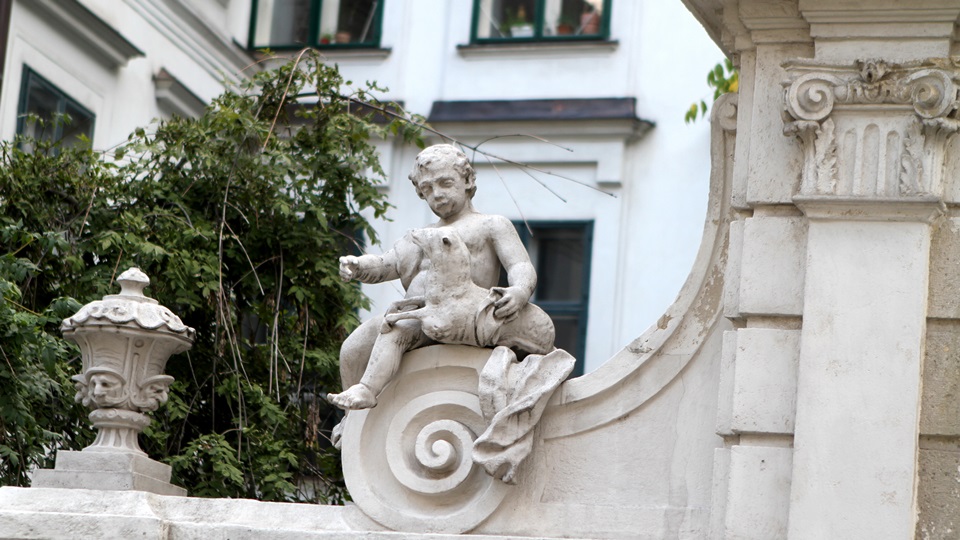 On 26 April 2018, the University of Applied Arts Vienna hosted the one-day symposium "Changing Politics - Changing Cultures", in collaboration with EDUCULT. Central to this event, which was developed by Michael Wimmer, were those artistic initiatives that critically aim to reflect on the new political situation and thereby counteract their apparent lack of alternative. Below you find a video recording of the symposium.

Political conditions in Europe are changing drastically. Only seven out of 28 EU member states are governed by social democrats while at the same time Europe is being overrun by an anti-liberal political wave. The British political scientist Garton Ash says that the “continent has been flooded by a wave of national populism” that – as we can witness in Hungary and Poland – is undermining the achievements of liberal democracy.

This trend couldn’t be reflected better than in the European political reaction to the appointment of the new Austrian right-wing government. While the formation of government between the conservative and right parties in 2000 in Austria has been understood as a direct provocation to the European integration project and was reacted to with so-called political sanctions, the inauguration of the Austrian government in 2017, again between the two parties, is widely accepted at the European level as a representation of a new political normality.

At the same time, processes of disintegration that drive national societies apart are becoming more and more evident. Not only that the recent Austrian election campaign has been evidence to how voluntary and involuntary migration is used for a new round of social conflicts. Also, the paralyzing uncertainty that has captured a large part of the populations and decreasing solidarity are part of this scenario. Both trends represent challenges to civic engagement as an irreducible prerequisite for the further cohesion of national societies.

In Austria, Norbert Hofer, a right-wing populist almost became President of the Republic. Now a far-right/conservative federal government gets ready to realize a societal U-turn that their representatives had promised during the election campaign. The political programs of the new coalition parties also imply a massive impact on what culture will be about and its reinterpretation in the next years. Intentions like “Modernization of the Austrian Cultural State” (ÖVP),  “Fighting cultural identity destruction” (FPÖ) or “Defending our culture and language” (FPÖ) suggest the interpretation that the new regime is going to reinstall a specific Austrian culture that will attempt to demarcate itself from what is happening outside. What we can expect is the realization of a retro cultural policy concept that is mainly about defending “Austrianness” as an idea of a unique homogeneous culture against all kinds of diversity concepts.

The creeping decline of the party landscape, which – as the brilliant election victory of Emmanuel Macron has made obvious – has fully affected the big traditional parties. This fundamental transformation of the political party landscape has nurtured hopes that civil society – a thoroughly vague term, ranging from private foundations or civic engagement to new social movements – would successfully become an increasingly important actor in the political arena and thus renew the political system “from below”. Respective new cultural policy priorities in selected European countries (France, Germany, Italy, Spain,…) will be presented.

The fact that civic initiatives in this regard can be an important factor in such events, has become obvious when new illiberal democracies have attempted to forcibly prevent these initiatives, like in Hungary. The question remains whether they can effectively counteract a social breakup caused by growing social inequality.

It can be assumed that these political changes at both European and national level will have a major impact also on arts and culture. While considerable restrictions on public funding are being applied to the sector, as is currently the case in Upper Austria, other actors are trying to adapt to new political conditions by explaining their willingness to promote a specifically national, Austrian understanding of culture.

But central to this event are those artistic initiatives that critically aim to reflect on the new political situation and thereby counteract their apparent lack of alternative. As examples of good practice, they provide illustrative material for answering the question as to whether and, if so, in which way artists and other actors of the cultural sector are willing and able to deal with the new political circumstances and to reach significant public spheres with their artistic forms of expression.

While the symposium sets out to negotiate primarily the European context, the conclusion of the event should primarily reflect the Austrian-specific implications. After five months of government activity, it should be possible to have a first round of assessment of the new cultural policy of the right-wing/conservative coalition and to discuss possible effects on the arts and culture sector. 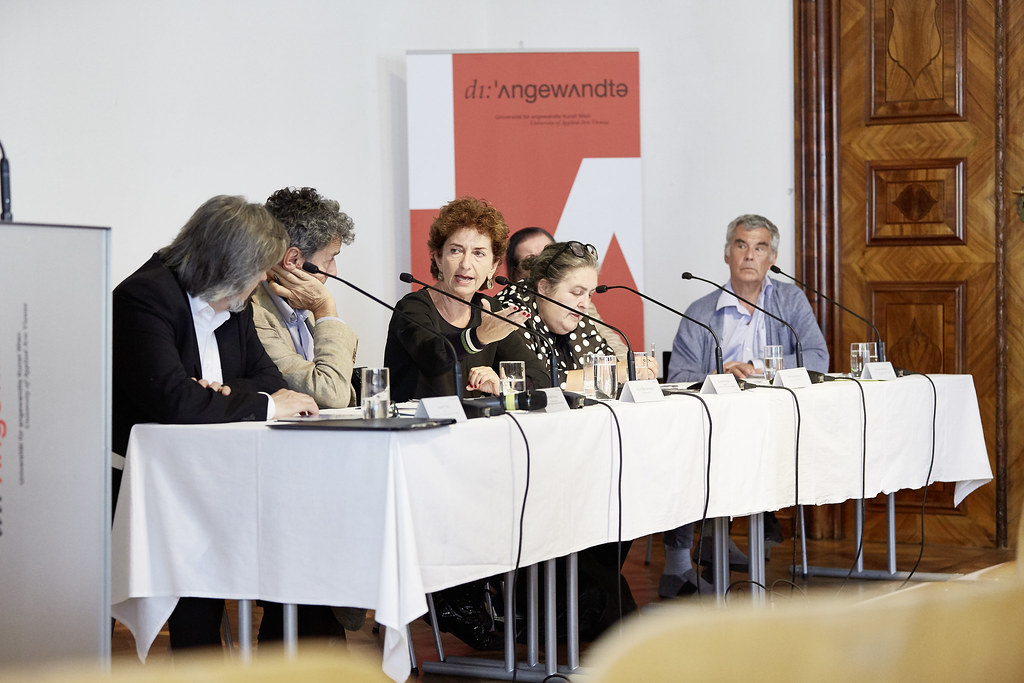 14:30 – 15:00 Presentation of Artworks by Masterstudents of Social Design

Milly Reid and Enrico Tomassini “Some Call Them Balkans”, Vienna

18:00 – 19:30 Closing Panel: Cultural Policy in Times of the Political Change in Austria

Ruth Beckermann was born in Vienna where she also spent her childhood. After her studies in journalism and history of art in Vienna, Tel Aviv and New York, she took her degree as Dr.phil in 1977 at the University of Vienna. She since contributed as a journalist to several Austrian and Swiss magazines.
In 1978 she (co-)founded the distribution company filmladen in which she was active for seven years. In this period Ruth Beckermann started to make films and to write books. Since 1985 she works as a writer and filmmaker. Her film “The Dreamed Ones” was selected at many international festivals and won several awards. Beckermann is currently preparing her next project: “The Waldheim Waltz” which will be presented in 2018.

Luca Bergamo was born in Rome in 1961, where he is now the city counsellor for culture. He studied Political Science in the Sapienza University of Rome. He participated in the creation and the organization of the Enzimi cultural festival in Rome (1995-1999). From 2001 to 2004, he became President of the Organizing Committee of the Biennale des Jeunes Créateurs d’Europe et de la Méditerranée. Between 2012 and 2016, he was Secretary General of Culture Action Europe.

Cesy Leonard is an artist, filmmaker, director of the planning staff of the Center for Political Beauty and manages the department of film. She started her artistic career as a graffiti artist on the streets of Stuttgart as well as commuter trains and was one of the few women in Stuttgart’s Hip Hop scene. She was a rapper in the all-women crew “No Frills” and toured all over Germany. She had her first engagement as an actor in 2001, in a permanent role in a tv-show on ARD. Several engagements followed in tv and film followed. After a few of her own films, she met the Center for Political Beauty in 2010, which instantly became her artistic home.

Vincent Martigny is Assistant Professor in Political science at Ecole Polytechnique and a Research fellow at LinX (Laboratoire interdiscplinaire de l’X). He is also Research Associate at CEVIPOF (Sciences Po research centre for French Politics) and teaches French Politics in this institution. His research focuses on the contemporary forms of French nationalism and the ongoing debates on national identity in Europe, with a specific hint on cultural nationalism.

Guillaume Paoli, born 1959 in France, lives in Berlin. He was co-founder of the group “Glückliche Arbeitslose” (“Happy Unemployed”) and co-editor of their journal “müßiggangster”. In 2003 he started working as “demotivation trainer”. From 2008 to 2013 he was employed at the Leipziger Centraltheater as “Hausphilosoph” (“in-house philosopher”) There he was in charge of the “Prüfgesellschaft für Sinn und Zweck” (“audit company for intent and purpose”) and ran a “philosophical office”. Today he works as a freelance publicist and lecturer. In 2016, he participated at the “Kapitalismustribunal” (tribunal of capitalism) in Vienna.

Robert Prosser, born 1983 in Alpbach/Tyrol, lives both in Vienna and his hometown. Next to his studies of comparative literature and Cultural and Social Anthropology, he spent time in Asia, the Arab world and England. He does performances, is co-founder of “Babelsprech”, a project supporting young poetry, and conceptualizes the reading series “Kombo Kosmopolit” at Literaturhaus Wien. He published i.a. the novel “Geister und Tattoos” (Klever, 2013), and as a co-publisher, “Lyrik von Jetzt 3” (Wallstein, 2015). His novel “Phantome” was published in August 2017 by Ullstein fünf.

Milly Reid is a spatial artist currently based in Berlin. Following a background in arts, architecture, and social design, she explores how spatial and social practices perform together beyond physical and mental boundaries. Her works evolve through poetic and theatrical narrations that are realised in projects concerning constructions of fear, forms of belonging, and ways of being on-the-move.

Anke Schad completed her PhD in Cultural Management at the University of Music and Performing Arts Vienna in 2017. She works as an independent scholar and consultant in the areas of cultural policy and management, international cultural cooperation, and education and learning.

Martin Schenk is a social expert as well as director of Diakonie Österreich and co-founder of the “Armutskonferenz” (“conference on poverty”). His focuses are welfare policy, health, kids/youth and integration. Martin Schenk is co-initiator of various social initiatives, such as “Hunger auf Kunst und Kultur” (Access to culture for people with little or no money), “Wiener Spendenparlament” (Voices against Poverty), the association “Hemayat” (support of severely traumatized people) and “Sichtbar Werden” (people affected by poverty organize themselves)

Enrico Tomassini – with Architecture and Cinema as a background his interests and focus naturally broadened towards the development of cross-disciplinary critical approaches to different societal issues, creative processes and urban spaces. He likes to think, to theorize and to put into practice participatory and collaborative processes where storytelling, mapping, critical exploration, spatial and performative interventions are used in order to challenge narratives and representations of a reality.

Born 1977 in Berlin. He completed the directing program at the Max-Reinhard-Seminar Vienna and founded the theatre-label “internil”. Since 2005, he is working on independent theatre projects in Vienna, Leipzig and Berlin, focusing on political radicalisation during the past years. He is experimenting with various combinations of documentary material, new media and performance. Also, he works as a video artist, lecturer and trainer at workshops for aethetics of radical internet propaganda, publisher. He has received serveral scholarships, awards and residencies.