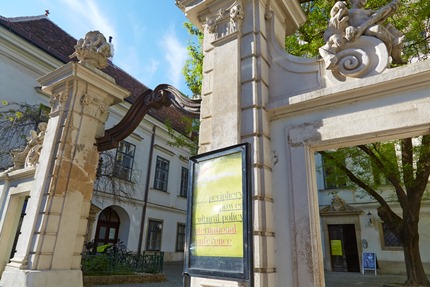 On March 30th 2017, the one-day European symposium "Cultural Politics and Right-Wing Populism" will take place at the University of Applied Arts Vienna in cooperation with EDUCULT. In light of the increasing right-wing populist forces in Europe, the symposium would like to present fundamental socio-political and cultural-scientific considerations as well as an overview of current cultural policy developments in selected European countries (including Great Britain, France and Hungary). In doing so, artistic strategies, which deal with these changes in Europe, will also be introduced and discussed.

The many ramifications of the latest wave of globalization are generally criticized by representatives of the new right, and they will be used to propagate a counter-agenda: one against “globalists“ in the form of advocates, profiteers, and visionaries of globalization. In the struggle against a culturally, economically and socially borderless world, it is important for these anti-liberal political forces to once again strengthen the sovereign nation-state, which is concerned solely with the welfare of its own citizens. In the search for the reasons for social inequalities, the fight against unjust economic power relations is no longer addressed, but rather the defense against ethnic-cultural differences.

In addition to fundamental socio-political and cultural-scientific considerations on the current political radicalization, the symposium and its guests will egnage with an overview of cultural policy developments in selected European countries, such as Great Britain, France, Hungary and the Netherlands. To this end, artistic strategies will be presented that deal with current political changes in Europe. A final panel will provide information about the consequences these developments have, especially in the field of artistic education and training. 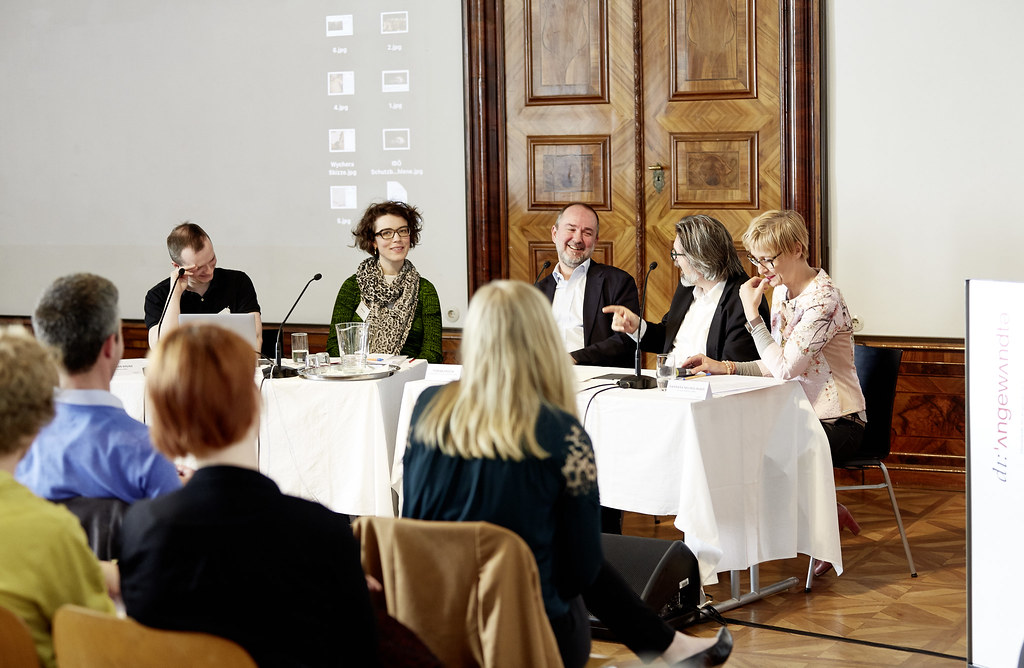 The conference will be held in both German and English.

Dimitri Almeida studied ethnology and political science at the University of Freiburg and received his PhD from the University of Kassel for research on “The Impact of European Integration on the Structures and Dynamics of Party Competition”. An expert on the development of the Front National in France, he focuses on research and teaching in the field of nationalism and right-wing extremism, religion and laicism, as well as lines of conflict and identity-forming processes in France. Since 2009 he has been a lecturer of French and Portuguese regional studies on the Georg August University of Göttingen.

Werner T. Bauer studied cultural anthropology and oriental studies at the University of Vienna, working thereafter as an independent journalist and researcher, spending time from 1988 to 1994 in Istanbul. From 1998 to 2001 he was an educational consultant for the Afro-Asian Institute (AAI) in Vienna. Since 2003 he has been active as a research associate at the Austrian Association for Political Consulting and Development (ÖGPP). His areas of research focus include international politics, urban development, migration research, and societal and cultural policy. Since 2008 he has worked intensively with the topic of right-wing populist parties in Europe. Along with Lilli Bauer, he has worked as an editor of the internet lexicon dasrotewien.at, and has been a curator of the permanent exhibition ‘’Das Rote Wien im Waschsalon Karl-Marx-Hof.’’

Author Julian Bruns lives in Vienna and researches in the area of right-wing extremism with a focus on the New Right. He also worked at the ÖH-Office for antiracism work at the University of Vienna. Along with Kathrin Glösel and Natascha Strobl, he wrote the book ‘’The Identitarians. A Handbook on the Youth Movement of the New Right in Europe’’ (2014) as well as ‘’Right Culture Revolution. Who and What is the New Right of Today?’’ (2015).

Thomas Drozda studied business and economics at the Johannes Kepler University of Linz. After working as managing director of the Trotzdem-Publisher in Vienna and in the department for economic studies at the Austrian National Bank, he joined the cabinet of Chancellor Vranitzky in 1993, where he adopted the fields of art and culture. From 1998 to 2008, Drozda worked as the commercial director of the Burgtheater, and from 2007 to 2014 he was also a member of the Austrian Broadcasting Corporation, ORF’s Board of Trustees. In 2008 he joined the Vereinigte Bühnen Wien as managing director. Since 2016 Drozda has now become the Federal Minister for Arts and Culture, Constitution, and Media.

Michel Gölz graduated from a Liberal Arts and Sciences College in Utrecht with the main subjects Anthropology, Urban Studies, and Political Science. He is interested in applying theory to contribute to positive societal transformations. He speaks the languages of different disciplines and works towards a productive relationship of theory and practice, use methods from the arts to include citizens in the urban planning process, and ultimately aim to build fictions of alternative living models to give an idea of where we are and want to go. In 2015 he enrolled at the University of Applied Arts Vienna in the Master programme Social Design.

Kenan Güngör is the head of the office for social and organizational development at [think.difference] in Vienna. As an organizational consultant and international expert on integration and diversity issues, he advises and accompanies state and non-governmental organizations at the federal, state, and municipal levels. He has led, among others, numerous integration-related projects at the state and city levels. As a strategic advisor he guided the city of Vienna for several years in integration and diversity-related topics. He is also a member of the independent expert council of the Austrian Federal Government as well as the chairman of the Expert Forum Prevention on Deradikalisierung & Democratic Culture for the city of Vienna. His main areas of focus include: social change, integration, participation, diversity, organizational development, urban sociology, youth, identity, conflict and violence analysis, and radicalization.

Sebastian Kraner lives and works in Vienna. From 2013-2017 he studied TransArts at the University of Applied Arts Vienna. Since 2015 he has been studying social design at the master’s level. He has been recognized within and beyond Austria for his short essay films and has been invited to numerous festivals. Recently he presented his work at the University of Applied Arts in the exhibition ‘’Not Talking with the Right.’’

Virginia Lui is a Sydney born multidisciplinary designer and artist currently based in Vienna. She studied architecture at the University of Sydney and practiced in some awarding winning architectural firms before studying Social Design at the University of Applied Arts Vienna. She has worked on projects dealing with topics including urban design and rights to public space, affordable housing, cultural exchange, migration and right-wing populism. Her process involves interdisciplinary work and an exploration of a variety of mediums between art and architecture. What concerns her most is the social responsibility of art and design and its potential to impact society and our environments.

Stuart MacDonald is the Founder and Associate Director of the Centre for Cultural Relations (CCR) at the University of Edinburgh. Prior to joining the university he was as a strategist and public policy expert with more than 20 years’ policy experience in international, educational, cultural, social and public sector reform roles. He left the Government service in 2011 to follow his strong interest in cultural relations, initially working in Tunisia after the 2011 revolution, which is where the idea for the CCR originated. Today he is a consultant for ifa (Institute for Foreign Cultural Relations) working on the future of international cultural relations in Europe post-Brexit.

Born in 1969 in Bochum, Nils Oskamp studied graphic design with a focus on illustration and has worked as an independent illustrator since 1999. In 2002 he became a co-founder of the German Illustrators’ Organization e.V. (IO), where he was active for several years as an editor and issuer of the organization’s newsletter. In 2012, he was honored with the Red Dot Design Award Honorable Mention and founded the international work community Atelier sans Fontières. In his first graphic novel ‘’Three Stones” he tells the story of his youth in Dortmund-Dorstfeld in the 1980s, where he became a victim of right-wing violence.

Born in Pittsburgh, PA, USA in 1991, Heather Painter studied English, German, and Political Science at Washington & Jefferson College. Afterwards she became a Teach For America corps member, teaching in an underserved elementary school in rural Arkansas. She has worked at the Department of Education Reform at the University of Arkansas, the Center for Applied Policy Research in Munich, and is currently a U.S. Fulbright grantee to Austria, where she engages in projects related to education policy, teaches English as a foreign language, and completes her master’s in political science at the University of Vienna.

Dóra Papp has been a cultural manager for several years, organizing diverse workshops, performances, and festivals. As CEO of the Krétakör-Foundation, founded by Hungarian theater director Árpád Schilling, her focus is on societal development rooted in participation. She is concerned with projects that are connected to current social developments.

Marlene Rigler is an art historian and international curator with an academic background in aesthetics, literature, and European cultural policy (Karl-Franzens-Universität Graz, Paris I – La Sorbonne-Panthéon, Institut d’Etudes Politiques Grenoble). From 2005-2007 she was responsible for exhibits in the culture department of the history museum Mémorial da la Shoah in Paris, and in 2007 she was the international curator and film curator at the Argos- Centre for Arts and Media in Brussels. In 2013 she was appointed the founding director of the city cultural center ‘’Lee 116’’ in Montreuil (Seine-Saint Denis). In March 2017, she took over the Franco-German Foundation (CCFA) in Karlsruhe. At the same time, she is also a Ph.D. candidate in the field of art science at the Academy of Arts in Vienna under the philosopher Prof. Ruth Sonderegger.

Paul Schuberth, born 1994 in Steyr (Austria), is a music student and accordion player in Linz. As a musician he has traveled to Europe, Africa, and Asia. He has published a dozen recordings (with “trio akk: zent”, “Duo Vakkordeonioline”, “Dinovski / Schuberth”) since 2008, alongside his participation in other projects. Since 2014 he has written texts on political topics (e.g. in  derstandard.at , Augustin, Versrogerin, Café KPÖ, Semiosis-Blog), and he has also been trying to combine his political interest with his musical activities.