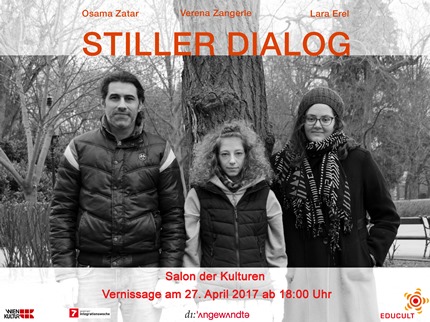 With the title Silent Dialogue the artists Lara Erel, Verena Zangerle and Osama Zatar will present some of their current works in the Salon of Cultures. We invite you all to join our vernissage on April 27th, 2017 at 6 p.m. in EDUCULT’s gallery rooms at the Museumsquartier Vienna!

Location: EDUCULT, quartier21/MQ, Museumsplatz 1/e-1.6, 1070 Vienna (Entrance1.6, inner courtyard of the MQ-main entrance, on the right-hand side of the Café Daily – 3rd floor) 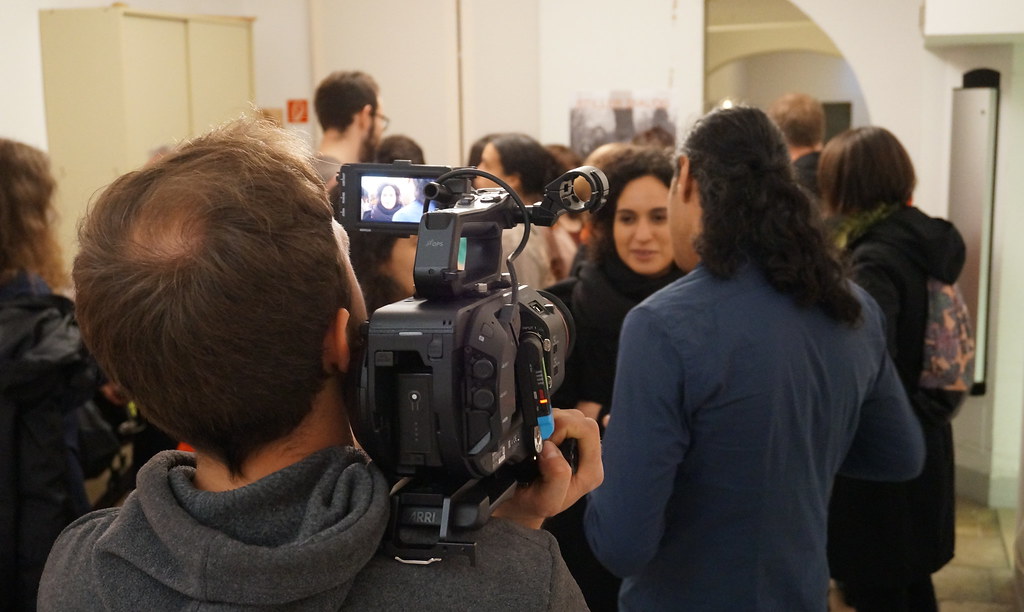 Lara Erel, born in Tassin-La-Demi-Lune (France), has been studying graphics and print graphics at the University of Applied Arts since 2014. In addition to sketches and prints, she also documents places that she develops as “Gegenstädte” (Gegenstand is the German word for property, and Stadt is the German word for city. The title is a play on words, so the title points at the combination of items to create cities). The impression of a place is created not just through the location itself, but also by its content, its property, and its history.  In a city, building, paths and the people who animate them provide the framework. The images themselves consist of intimate objects from certain private rooms which, through their form, assume the essence of a city. When accumulated, these simplified forms become a new fantasy city, a “Gegenstadt."

I have always been fascinated by the power that abstraction has, not to imitate reality, but to generate a new one. In terms of medium, I move throughout the fields of drawing, painting, and print graphics. All of the techniques I use have their own method, but at the heart of all of my art remains the process-heavy work. My process is a concentration-driven, direct, physical, intuitive process that starts very freely und unrestrictedly and becomes more limited with each decision. A constant game of action and reaction, which always brings me to a new starting point, into a new situation, which I enter into, until the feeling of completion arrives. The final image that results comes to life during the production process, and this is where I root my preference for large formats, which promise me the time and possibility of movement.  Compositionally, I always work on complexity, a dynamic, a tension, but the impression of harmony must never be missing. Total concentration, movement from the front of the back and across the medium, filling, changing, transforming, and creating a new surface.

Osama Zatar was born in 1980 in Ramallah, Palestine. Insurmountable obstacles in the conflict between Israel and Palestine made a life with his Israeli wife Jasmin Avissar, a freelance dancer and choreographer, impossible in his homeland. After a brief stop in Germany, she made her way to Austria, where Osama Zatar was invited to the exhibition "Overlapping Voices: Israeli and Palestinian Artists" by the ESSL Museum in 2008. He studied sculpture under Paul Taylor and graduated in the class of Heimo Zobernig at the Vienna Academy of Fine Arts in 2014. His work was last seen in the exhibition "BORDERS Nobility Dauood / Osama Zatar" in the ARTEMONS CONTEMPORARY Gallery near Linz. In the Café Prosa in Vienna, he has worked as a curator and for the networking of a community of refugee artists. In the series "EDUCULT in Conversation" Osama Zatar tells the story of his path to Austria and his understanding of art.

The Audience – The Unknown Entity
Scroll to top