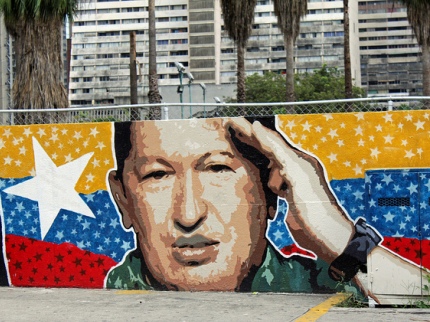 The case of Venezuela – on the political and musical perspective

There were not many media reports on the fact that the US is denying the Venezuelan President Nicolas Maduras the right to fly across the States on his way to China and that his participation in the UN General Assembly in New York is on stake. The reason is most likely the on-going anger at Edward Snowdon’s attempt to receive asylum in Venezuela as a political adversary of the US.

This is only the most recent crisis in the traditionally bad relationship between the US and Venezuela that has not improved since the death of Hugo Chávez and the election of Nicolas Maduro as his successor. After all, the “Bolivarian way” now prolonged with the election of the charismatic leader represents an alternative development in trying to support the disadvantaged non-White majority against the traditional elites. This leftist project with all its strange side effects such as Chavez friendship with the regimes in Iran and Belorussia is still popular in Latin America. This is due to the hope in finding alternatives to the dogma of Neoliberalism – alternatives that do not firmly believe in markets and redistribute societal wealth in a different manner.

The political events in this context are not without frictions. And yet, it is remarkable that the European media are rather critical in commenting on these developments, even doubting the result of the democratic elections. However, there are no doubts about the economic problems, partly a result of the economic obstructions that the government is trying to deal with, at times with drastic means (http://www.spiegel.de/wirtschaft/soziales/sozialismus-in-venezuela-fuehrt-zu-knappheit-von-klopapier-und-milch-a-913020.html).

Although the situation might not be as bad as the European media are saying, Venezuela is suffering from severe social problems. There are official travel warnings referring to one of the highest murder rates worldwide and listing Caracas one of the most dangerous cities.

El Sistema at the Salzburg Festival

I tell this story because it forms the background of the focus on El Sistema at the Salzburg Festival 2013. The program directors decision was taken based on the success story of this initiative founded in 1975 in the outskirts of Caracas. El Sistema aims at improving the life of poor young people through classical music. Several choirs and orchestras of young Venezuelans were living witnesses how music can bring joy and hope. The highlight of the visit was the speech of José Antonio Abreu. The legendary founder of El Sistema described the program as a model for the future, giving evidence on how integration can be promoted with artistic means.

With the orchestras and choirs invited he would offer an „ideal instrument to integrate young people in a life of community and solidarity, forming their personality. “ His aim would be the creation of a “new man for a new world, cultured both in science and the Arts, a passionate, altruistic fighter full of creative ideas.” The Austrian Minister for Education, Culture and the Arts carried on by describing El Sistema as “a counterpoint to the lack of perspectives affecting so many young people also in Europe”.

But then I came across this thought-provoking quote of Abreu: “Once artistic education moves from the periphery to the centre of the education system, art will turn material poverty into intellectual wealth.” And I imagined the audience of this speech, born on the butter side of the world, how they warmly applauded, moved by the beautiful voices and music of the poor young people. But I doubt that they thought about the distribution of real wealth, even less so when they found comfort in Abreu’s words on the value of intellectual wealth.

El Sistema in Salzburg met a lot of media interest, referring to the program as a “message sent out to change the world through music.” Quite striking was the comparison of two articles in the Krone newspaper, one reporting on the „Power of Music“ of El Sistema, the other one describing a day in the life of an average Salzburg festival visitor, who spends around 4000 Euro per festival day.

Trying to connect the political context with the socio-political aims of El Sistema, I am surprised how far they are separate from each other. It seems the two things do not have anything in common. At least in Salzburg, there was no word about the political future of Venezuela.

The Reflections of a Nonpolitical Man 1915 and now

Reading Rüdiger Safranski’s „Romantik – eine deutsche Affäre“ (Romance – a German Affair) I came across Thomas Mann’s „Reflections of a Nonpolitical Man“, written during World War I. He characterises the German Kultur as a “dionysic force”, superior to the civilising effects of a “bettering Enlightment and revolutionary philanthropy”.

As a “Dionysicist with crease and strengthened forces” (Safranski), Mann identified music with romantic concepts such as emotions, tragedy, passion, ecstasy, but also with Eros and death wish. As such, he regards music as politically innocent. “Music deserves to be protected from politics:  it must not become politics, nor must it be used by politics” (Safranski).

Looking at this superficially, one could suspect that this romantic figure has not come to an end. Abreu does not hide the fact that El Sistema has been sponsored by the Venezuelan health department.  Apart from that, he does not refer to the political conditions in his country. Instead, he calls for the “educators to passionately believe in the immense opportunities of arts, no longer an anachronistic bulwark of pseudo-elites but the threshold to a new word, the heaven’s gate, to break the vicious circle of poverty.”

Indeed, El Sistema has opened up new perspectives for thousands of young people who woud never have been able to leave their barrios without dedicated music teachers.  That is a great accomplishment of José Antonio Abreu and his companions.

And many questions unanswered…

Nevertheless, many questions are unanswered regarding the discrepancy between the stories from Venezuela. Looking at these questions could help analysing the effects of sustainable cultural education for social development.

For example, the question why a traditional European music festival invites a program from overseas, given that the context does (thank God) not compare with the Austrian. Or, asking the other way round: why has the Salzburg Festival not started a comparative education program addressing not only elites but also the ordinary citizens?

The second question refers to the European tradition to selectively promote talents among poorer parts of the population. Churches and other charitable organisations have been providing scholarships for music talents from deprived families. What is ironical: these initiatives were not about change, on the contrary, they were about stabilising the unequal system. When reading about El Sistema developing “music schools for exceptional talents”, I see some similarities between the traditional recruitment of talents form deprived milieus in Europe.

The most difficult question is probably if El Sistema can really change the Venezuelan society or, in a fascinatingly returned cultural imperialism, all societies through music. This happens in the context of the coinciding decline of young people’s prospects in Europe and the boom of cultural education, reaching up to the Olympus of culture, the Salzburg Festival. Evil to him who thinks that this could be an attempt to hide the real problems of young people on this planet.

Conditions are changed through political decisions, not through music

My suspicion, my hope: living conditions of the population are changed through policies, not through music. And that’s a good thing.

Otherwise, the leader of the right-wing nationalist Austrian Freedom Party H.C. Strache would be right in using music to mobilize his followers, rapping “Stand up for HC!”.

For music educators, the question if music only causes positive effects or if it is also about the content that might be packaged in a joyful tune but nevertheless transporting racism and hatred.  The message of the policymakers will after all decide upon the independent way of Venezuela or the reintegration into global Neoliberalism. But this is not written in any musical score.

Evaluation of the advanced cultural management training
Scroll to top