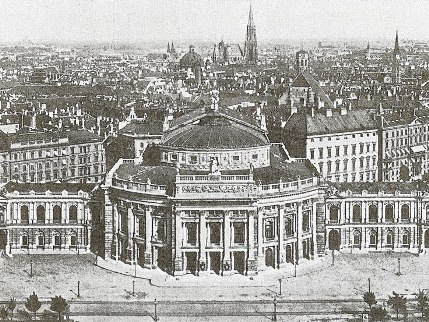 Stories from Austria, a small country (but not in the eyes of some protagonists)

Lately there has been much public attention on two cases of bad governance. On the one hand, the breakdown of a regional bank, Hypo Alpe-Adria, with the effect of at least 12 billion Euro damage for Austria’s state budget. On the other, the discovery of, let’s call it creative accounting at the Burgtheater Vienna, leading to a loss of 12 Mio. Euro. Experienced Austrians could easily call the second case “peanuts”, since the deficit of the country’s most prominent theatre sums up to at most one thousandth of the Hypo-desaster. Peanuts, as the architect Wolf Prix called it on a podium discussion with the newly appointed state minister of culture, Josef Ostermeyer. And yet, both cases led to public furore as they are touching on something very fundamental.

According to economic parameters, Carinthia has for a long time been the taillight of regional development. But then, the talented populist Jörg Haider took over promising a prosperous future. The deal Haider offered was unconditional consent to his dubious decisions and the appreciation of Carinthia beyond its borders, for example in the traditional rejection of the Slovenian minority.

And suddenly, the sad songs of Carinthia, always present, sounded more cheerful. Haider himself handed out 100 Euro notes to the poor in front of his residence. For initiatives like that, he needed money, a lot of money. Therefore, the sovereign took from „his“ bank, the Hypo Alpe-Adria, where his devoted servants were eager to support his obscure business deals. Haider ordered liabilities summing up to several annual state budgets: a debt that according to the latest political decisions is now to be cleared by Austrians’ tax money. The Sun King of the South cannot be made accountable. He terminated his life in a car accident, probably not voluntarily.

Quite a different scenario in the second case: the Burgtheater is by no means a taillight, but quite in the contrary referred to as the prime address of bourgeoisie representation. Christine Drössel characterises the institution as “powerful bastion of the Beautiful-True-Good in direct neighbourhood of the city hall, the Hofburg and the Parliament. K.K. Hofburgtheater is written in golden letters over its front entrance – the royal and imperial is literally inscribed. The Burg actors are admired like Hollywood stars, the director is the king”.

The „King“ pushed his luck a litte too far

The former state secretary of culture, Franz Morak, a representative of a conservative-right-wing populist government and himself a member of the Burgtheater ensemble has chosen the Matthias Hartmann as the director. His job was to keep the institution from feudal times – with just over 50 Mio. annual funding – talking, literally, to increase the prestige of this symbol of Austrian cultural power. In this, Morak (and his successors) limited Hartmann by limiting the funding – on a high level. But still, this must have meant a rather painful limitation of a hypertroph personality (or rather greedy personality, at least something that Haider did not need to bother with, due to a solid basis of “arianised” wealth). Hartmann’s way to deal with this was to decide – regardless of his executive position – not to be in charge of the finance stuff but to make use of any opportunity to take personal financial advantage of his power. With this, he was eventually not successful. To the surprise of many, the politician in charge Josef Ostermeyer pulled the emergency break and – for the first time in the history of the Burgtheater – the director got fired. In this, he demonstrated that the power struggle between cultural policy and management is not decided yet, at least this time.

This led to a broad cultural policy debate – at least one positive effect. On the one hand, some representatives of the establishment worry about the reputation of the institution and provide ideas on how to get back to normal as soon as possible. On the other hand, some like the curator Martin Fritz regard Austria’s cultural institutions at the crossroads, thus having the opportunity to get rid of the feudal character of Austrian cultural policy.

Trying to wag the dog

At this point, two remarks: in the various attempts to discuss the performance of Hartmann refer to the claim that high quality art requires a permanent exceptional state where the question of resources is inappropriate. They should be provided, no matter if they are used in a productive way. Frank Castorf referred to the Burgtheater as an “anachronistic theatre kingdom” that should simply get the money that it needs. Quite similarly, the ensemble representative Roland Koch said that the “organised theatre mania” cannot be measured by money but provides spectacles such as a flying Gerd Voss.

With this attitude, I would say, a self-concept of leading cultural managers is sustained, trying to keep their own privileges by defending their vision of art. This has led to a situation where the leaders of cultural institutions, once in charge, resist to any political attempt to control governance. Instead, they regard themselves as the preservers of the real matter of cultural policy that the official political representatives should affirm and not govern. First ideas on how to deal with the crisis such as to cancel the education program (Junge Burg), point in this direction.

The high losses of the Burgtheater (that the supervisory board should have detected much earlier) and the extraordinary salary of its director point at a second problem within the cultural sector, a growing gap between the major institutions and the off scene. Whereas the first ones juggle with millions (on this blogged before describing the situation of the theatres in Vienna), the second ones are faced with worsening conditions by an increasingly restrictive public funding system.

The German cultural statistician Michael Söndermann has recently published some interesting reports on this aspect, demonstrating that the average income in the cultural sector is meanwhile above the general average income. Despite this, the income of off-scene artists is just 8000 Euro per year, way below any other professional sector. This means that a small elite of privileged cultural professionals has to earn a lot in order to more than compensate this structural underpay.

This means that fundamental cultural policy decisions are needed: As the privileged sector is asking for more of the funding cake, decision-makers have to deal with the question how to address the upcoming generations of artists and cultural professionals. With the impression that the ones inside the established system want to stay inside by all means possible and the one who haven’t made it will stay outside, cultural policy is either a reaffirmation of growing inequality of a social corrective. We will see what Josef Ostermayer has up his sleeve, besides the redundancy letter for Matthias Hartmann.

And again: small Austria as the trigger of something huge

Finally, on a very different matter: in the recent discussion on the Crimea crisis, a historic comparison is lacking that could make the Austrians think. It was Austria that Hitler took “heim ins Reich” in 1938 with the approval of the majority the population that regarded itself as part of the German people. The following appeasement policy of the world powers was, as we all know, not appropriate in order to stop the expansion plans of Germany. No, to say it clearly, Putin is not Hitler, but Germany has its reasons to recall the uncontrollable consequences acts against international law. The memory of Jörg Haider and his talk about “Austria as a part of the German cultural nation” or “Austria as a failed nation” is a scaring example.