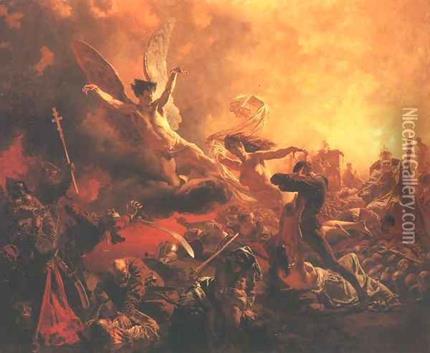 Down with this culture! Long live the arts!

Comments on the current culturalization of right-wing populist politics

In this context, the French economist Jean Pisani-Ferry speaks of the emergence of a new ideology (article in German). According to Ferry, living conditions worsen, particularly for the lower middleclass. Their anger about necessities and, subsequently, the feeling of powerlessness contributed significantly to the rise of populist politics.

Taking a closer look at the slogans of alternative politics, one quickly spots the specific cultural context of justification. The spokespeople see their national culture in danger due to increasing migration. By national culture, they mean a metaphysical common destiny defined by specific values, which needs to be defended against foreign culture at all costs. Making these assertions, the right-wing populists conceal on the one hand the real causes for social malformations and, on the other hand, question the achievements of civilization that overcame national border demarcations.

In my last blog “Was ist österreichisch?” (article in German) I referred to the Austrian Federal Ministry for Europe, Integration and Foreign Affairs’ „Value-primer” that aim’s at acquainting immigrants with the specific cultural values of living together in Austria. Flipping through the first pages one reads about values like constitutional legality, republicanism, human dignity, democracy and freedom. It is a fact that these values are not a unique attribute to one national culture but ideals of a western civilization. They are not realized to the same extent in every country but are definitely the opposite of national characteristics.

Culture is not civilization

Discussion the European community of values, there has been a contrast between culture and civilization since more than a hundred years. The German sociologist Wolf Lepenis pointed out in his study “culture and democracy” (article in German) that this particular distinction is not only a semantic problem, but something that influenced the political decision-makers for example before the First World War.

With this in mind one can see how people talking about national culture also negate civilization: In current political discussions one hears about unchangeable hierarchies, how free selections and parliamentarianism are despised and racist attributions (currently mostly to Islam). This shows culture’s negative core which focuses above all on delimitation and exclusion.

Cultural Politics would have had the chance to show the value of people with very different backgrounds living together. But it failed to use this opportunity. And now it is right-wing opponents of civilization that reconstruct national culture with success – and are not even bothered by constructive alternative ideas. Cultural Politics is busy with maintaining traditional cultural infrastructure and wrongly assumes that it can do without concepts for new culture that gives society new perspectives. Therefore, one should not be surprised that the German term “Willkommenskultur” (Welcoming Culture) mutated into a swearword in spite of an overwhelming engagement of civil society in taking care of refugees.

Cultural politics is in administration mode and left a vacuum which is now filled by political ideas that one thought were overcome. The only way to face these ideas is to question them and to refuse to accept them. Furthermore, I am overcome with heretical thoughts to stop using cultural ascriptions once and for all.

Especially European cities which see themselves as cultural centres using the idea of Cultural Industries run the risk of facing new cultural wars due to demographic changes. Culture is increasingly trivialized in its importance for social policy because of market economy. Nevertheless, one can assume that the dominance of the market could question the diversity of ways of living and working, even further if it is supported by right-wing politics and ideas of “our culture” versusa “foreign culture”.

What should we do about the negative core of culture?

In the ongoing series in the Süddeutsche Zeitung “Was ist deutsch?” (What is German?), Shermin Langhoff, the artistic director of the Berlin Gorki-theatre, pointed out  in her contribution “Kultur ist kein Integrationskurs – oder wenn, dann für alle” that the discussion about culture in German-speaking countries has always evolved around the self and the other. After Hegel, the idea of a special German nature became dominant which still exists. The hope was that this talk about German nature would have been buried after the Fascist destruction of morality. Instead a culture of criticism would have evolved, where art was the highest form of critical political practice.

Culture is not the arts

Besides the semantic problem between civilization and culture, there is another charged relationship. It’s been a while since I pointed out the inconsiderate use of arts & culture (article in German). The philosopher Rudolf Burger suspected already in 1983 (article in German), that this random use might indicate a lack of ideology in late-capitalist society. According to Burger, the random use would lead to the replacement of social theory with philosophical gibberish about culture: „Die Versöhnung von Kunst und Kultur ist die Ideologie einer Gesellschaft, die sich selbst in ihren Eigentums- und Machtverhältnissen kein Thema ist und die deshalb die Defizite der Sozialpolitik der Kulturpolitik zur symbolischen Verarbeitung überlässt“.

Burger did not know about the dominance of cultural ideology of right-wing forces against the background of an ongoing economic and financial crisis. Nevertheless, he pointed out the questionable use of cultural politics for solving socio-political problems. And he emphasized the loss of culture-critical potential of the arts, if arts & culture are lumped together. This is what Langhoff refers to when she says that the arts’ character is primarily non-integrative: „Kunst im Sinn von Kritik-Kultur war desintegrativ, in dem sie sich nicht vereinnahmen lassen wollte, sie schoss oft am Ziel vorbei, und das war gut so“.

Looking for a culture of criticism

Following Langhoff, even the arts are frightened to lose the will to resist national ideas of homogeneity – also due to economic reasons. New influences could contribute a lot to reactivation of the arts, for example from immigrants, especially with their different backgrounds as regards to content and formal aspects – if only they may.

According to Lanhoff’s interpretation it has never been so important as today to differ between the arts and culture. Since in its mainstream understanding, culture includes so many different ideas of culture, it is even more promising to reposition the arts as non-integrative. The arts could disturb the current trend of reconstructing hermetic ideas of culture, which are primarily directed against immigrants, so that a proper discussion is possible.

But in the end, it is not arty people but the citizen who has to draw the conclusions, he/she who is willing and capable of representing his/her interests against political resistance not only as an individually but politically.

Hospitality is the prerequisite of happiness

Recently, the German filmmaker and analyst of society Alexander Kluge commented on the correct behaviour in complex times (video in German). His confidence as contemporary witness refers to the reserves Europe was able to build up, which enables us to survive the current political crisis in Europe without relapsing into barbarity.

Even more important considering the current crisis is his research method as a mole instead of a goshawk in society: He wants to know what bothers every single one. He has advice for those self-appointed master builders of fortresses who do not wish more from live, than silence: Hospitality is the prerequisite of happiness.

If we only would follow this advice, the current immigration would not be a trigger for fear but the expression of human pursuit of a meaningful live.