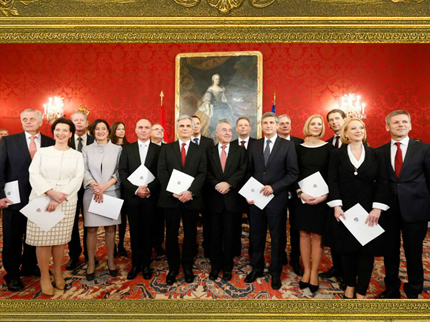 or A new Austrian government introduces itself

Christkind is giving Austria a new government. Right before Christmas, the Austrian President has inaugurated the coalition of social democrats and conservatives who together reached just above 50% of the national election votes (compared to 90% in the 1950ies). If Austria would vote today – the pollsters are sure – the right-wing populist FPÖ would win. Their head Hans-Christian Strache who reinterpreted charity as for “Austrian natives only” would become the next chancellor. At the moment he is busy preparing for the European elections, trying to forge an alliance of Eurosceptic or Eurohostile parties. Their electorate draws its potential from the growing frustration of the losers of the crisis, blaming the EU for the worsening of their lives. In this respect, the FPÖ can follow a clear political objective, which is to torpedo the unification process.

The former and present vice chancellor, conservative Michael Spindelegger promised comprehensive reforms “to unleash the economy”. The outcome of the coalition negotiations does not show any convincing new political aims. Instead, the document lists numerous noncommittal announcements, the smallest common denominator. Strache and his friend are highly amused.

During the election campaign, people expressed their frustration with the paralysed political situation. Angry citizens spoke up; new political groups participated in the election. All of them hoped for fundamental reforms in the education, health, social and culture system.  Nothing is going to happen, the paralysis will continue until worse will happen.

The resistance to trying a major strike has led to controversies even within the governing parties. Nevertheless, the proponents of power maintenance (no matter how) prevailed. They are now facing a media counter storm.

Basically, their defence is reduced to the necessary balancing of different interest groups, is it the federal states, the leagues, unions and chambers or other lobbyists in order to be able to navigate. They are trying to legitimise their strategy of small steps (in all directions) by arguing for the democratic participation of all social forces in decision-making processes. In this, they dismantle themselves as weak, blocked and leashed by all kinds of interests. And they are turning into grave-diggers of representative democracy, whose intention was never to suit everybody but to use the power of arguments (and positions) to stand up for beliefs on how to promote social development.

Just on the very evening when the new government was decided on, I was invited, together with a number of decision-makers, to an informal fireside chat by a leading manager of the Austrian industry. Once the details on the new government were communicated, the room was filled with cynical laughter and angry discussions on what has not worked out.

I was irritated by the defeatist consensus of this event. What I encountered was democracy fatigue at its best: no one person was ready to uphold the flag of democracy. Instead, the comments were about the paralysed system constraining any initiatives by a fixation on power maintenance.

The guests seemed to agree on an apocalyptic scenario (that the new government pretends to administer as well as it possibly can) where political involvement does not make any sense. At the end of the event, the host encouraged the guest to talk about something more uplifting and to try to deal with the growing dissatisfaction (or to wait until the pack gets reshuffled).

In order to come up with a few sellable surprises, the conservative party has made some quite fancy staff decisions. For example, a prominent market and opinion analyst has been named the head of the ministry of family affairs.

On this, another anecdote: a few years ago, we spent a Christmas family holiday at a hotel in Salzburg, together with two consultants of the then chancellor. They – even while on holiday – read the morning press in detail to detect the hot topics for the agenda. Having Sophie Karmasin on board, the new government can get even closer to the interests of the voters and target its decisions even better.

Economics and science in a new clinch

The decision to abolish the science ministry and to merge the science agenda with the ministry of economics has led to protest. This means withdrawing a historical progress of the 1970ies, when a science ministry was established for the first time. The reason can be found, now and then, in a traditional hostility towards intellectuals and artists (according to Eurobarometer, Austrians rate the importance of science and research least among the EU-countries).

Wouldn’t it be again cynical to be thankful of the new government making the relationship between science and economy that simple? By combining economy and research, it provides for the dominance of economic interests in research. Applicability instead of critical thinking has become the new paradigm that is reflected also in the new administrative structure. The statements of leading stakeholders of the field of science and research make a more severe conflict quite likely as there are not only critical voices, but a number of people within science and research who approve the synergy effects of a fusion of the sectors. The newly appointed minister for economy and science Reinhold Mitterlehner is content with the solution, referring to England, where a fusion of the two agendas has proven successful. However, he meets protest, organised mainly online through facebook and other platforms.

The young man and Austria‘s position in the world

The appointment of the 27-year old Sebastian Kurz, formally state secretary of integration as the new foreign minister of Austria has generated much attention. His appointment was connected with a diplomacy disaster, the absence of any Austrian representative at the memorial of Nelson Mandela. This affront made clear that Austria has said farewell to the international diplomatic stage – where in the 1970ies it played an important role as a conflict mediator. It is the home policy that counts – and to brush up the party image, it is only logical to ask a young conservative without any diplomatic experience to do the job.

Well, to be fair, as a secretary for integration, he performed quite well and silenced his critics. And yet, reading an interview with Jean-Claude Juncker, one of the most senior and experienced European eminences in the German “Spiegel” magazine, where he warns about “war” in Europe, there is reason to be alarmed. By bringing up the taboo word, Juncker highlights the likely consequences of the failure of the European project and the necessity to deal with this threat.

So, what about the reforms in culture and arts policy? There are changes, but not according to the wish list of some artists who would have liked a ministry of culture. The decision to place culture and the arts in within the competence of a newly formed chancellery ministry together with the agendas for public servants and the media means to falsify the assumption that arts, culture and education in one ministry would create successful synergies. The former finance minister Maria Fekter will become the new culture spokesperson of the conservatives. She is looking forward to “doing only comfy appointments” like going to the opera and the museum.

The small world of Austria as a rehearsal stage for the big world (Marie v. Ebner-Eschenbach)

I tell this story about the new Austrian government because it seems symptomatic for a number of other developments. Karl Kraus described Austria between the wars as “as the experimental station of the end of the world”. The country is far from regaining this dubious title, after a 70 years long success story. And yet, the present developments seem to tend towards a termination, a point of no return with consequences not only for Austria that I do not want to imagine.

I do not believe that „cultural education“ can do anything to stop this development. But the social and political attitudes on which we want to base cultural education can. I would like to wish everyone many wise and critical thought on this for 2014.