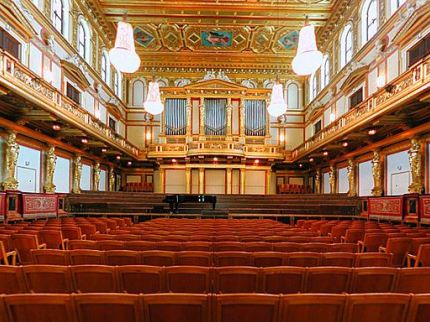 Another kind of audience research: may, or should proles visit the Musikverein Vienna?

Could it be that the architecture of cultural institutions is read as a cultural policy program, deciding on access and exclusion of the users?

The Society of Friends of Music as main supporter of the Musikverein is celebrating its 200th anniversary. Just at the end of the Napoleonic wars, this private initiative of the Viennese bourgeoisie started its task to “bring the classical works on stage”, thus compensating its political weakness. Besides the concerts, a music school was started, later on developing into the conservatoire (Konservatorium Wien University).

In the founding statutes, an interesting aspect highlights how the selection of music has developed into a kind of heritagisation, as the founders stressed the importance to “stage not only the new, but also the existing music literature”. Obviously, the desire for something “new” was much stronger than today, as the audience was not so keen to hear the same music again.

Whilst still in private hands (up to now only 4% of the budget derive from public funding), Emperor Franz Joseph supported the society by providing a new building opposite the Carls-Church. In 1870, the building designed by Theophil Hansen in the style of the historicism – representing a temple for music – was inaugurated.

From the very beginning, it was quite clear that the members wished to remain among themselves. The audience was mainly built by supportive subscribers, only a few tickets were available for sale. This attitude to represent a privileged position is manifest in the architecture, referring to the model of the ancient Greek society, declaring a minority of free citizens as representatives of democracy and bearers of culture and excluding the big rest of the population from any participation.

The whole world gets to see the symbolic power of the architecture at least once a year during the New Year’s Concert in the Golden Hall, displaying the dream of a valsing city of music. This lasting image contributes to the identification of the Musikverein as the place of conservative classical music.

And yet, even here time has passed on. More and more new compositions are financed and also performed. In the cellar, four new concert halls were constructed, where programming may differ from the classical repertoire (a side note: the US music patron Alberto Vilar cancelled his financing for the project and was replaced by Frank Stronach – a matter which might or might not predestine him as the future minister of culture. For a laugh, watch Austrian cabaret artists portraying him in an encounter with real “Prols” here. Also, an education programme for children and youngsters was started in order to get a young audience in touch with classical music .

The “Prols” and the end of democracy

And now, something different: one of the leading protagonists of neoliberalism, the journalist Christian Ortner has recently published “Prolokratie”, which quickly became the number one bestseller of the season. He argues that “the voter is dumbing down” and fears that the voting behaviour of the “prols” will destroy democracy and open the way for authoritarian regimes.

Well, there is a lot of stupidity in all social groups. The neo-politician Stronach demonstrates his interpretation quite drastically. One could also talk of a “dumbing down of the concert audience” when the Radetzky-march at the end of the New Year’s concert automatically makes the audience clap – irrespective of the fact that General Radetzky was the one to defeat the bourgeoisie revolution rather brutally in 1848.

Ortner does not mention the mighty opinion-makers who are rather keen to weaken the democratic system in order to strengthen their own economic and political power. And therefore, the growing social differences are reduced to the contempt of the losers: “Prols” are lazy and dumb by nature (this is visible when watching TV) and therefore it is their own fault that they are what they are.

The British journalist Owen Jones reveals that this kind of collective stereotyping is a questionable strategy to maintain the position of an increasingly insecure middle-class in his latest book “Chavs”. Owen refers to a climate of increasing social differences demonising the working class. In his analysis, it becomes clear that Ortner’s arguments can be interpreted as “Angstlust” of the winners against the losers.

I see a fundamental contradiction when on the one hand cultural institutions should be made accessible for new, socially disadvantaged publics and on the other a pamphlet on the “prols“ becomes a bestseller, disseminating socially discriminating stereotypes.

So, what does the Viennese concert audience think of the „prols“?

In this context, I would like to start an audience research experiment. We could find out if the Musikverein-audience agrees with Christian Ortner or with Owen Jones. Are the new audiences really welcome, as today presumably the only thing that matters is music – and not social belonging?

My guess: the power structures (defining who is in and who is out) are not reflected in making new programmes providing access for all. And therefore, we do not know why the same people who are discriminated against as unfit and to dumb for democracy should happily enjoy cultural offers that were created to exclude them.

The question if and how traditional arts and culture institutions that were built to represent the social position of exclusive users can at all correspond to a cultural policy asking to provide culture for all is up to now not raised. The architecture of the institutions is enough to execute the power of selecting the ones who know from a very early age that they are not meant to be there from the ones that feel welcome.

A long time ago, Pierre Boulez demanded to „slaughter the holy cows“

So is it really enough to refurbish a few cellar spaces in the hope to get new audiences in? Why should they suddenly feel welcome? (Besides the few with high ambitions who will then be treated – as Bourdieu suggests – as traitors by their former peers).

Other cities think about radically new ways to build cultural institutions in order to reach new audiences – other than in Austria, where anything contemporary is moved underground (the Museumsquartier, the Joanneum in Graz, the planned underground construction of the Federal Museums underneath the Maria-Theresia-Place). And even then, success is not guaranteed.

Other approaches were more that changes of construction. Programs like “Creative Partnerships” meant to unleash the creative potential of disadvantaged learners have not even tried to get the young people interested in the traditional arts. Instead, they regarded it as most important aim to create cultural spaces for dialogue that the young people recognise and accept as their own.

Cultural institutions as representation of a clash between requirements and realities

Could it be possible that the traditional cultural institutions somehow resist to democratisation? That they cannot let go their manifest role as selection mechanisms and remain caught between requirements or lip services and realities? There are a number of hints that the cultural policy of recent years has accelerated the tendency of musealisation immanent in the Austrian cultural sector, rewarding the remaining middle class for its cultural loyalty.

The latest example: Tyrol is building the biggest orchestra pit worldwide for the Festival Erl. Despite stagnant budgets for arts and culture, mainly affecting the off-scene, the state and the Republic of Austria invest 8 billion Euros each.

Finally, concerts and opera can be performed also in winter, with every ticket supported by 50 Euro taxpayer’s money. Probably the “prols” lacking money for heating won’t be able to travel to Erl to enjoy this kind of state support. Probably they don’t even want to go and watch “prolo-Telly” instead.

In a few days, you may enjoy the New Year’s Concert, at least on TV. Maybe with a different pair of glasses. And if you are really lucky, you can spot Christian Ortner in row 12, next to a real “prol”.

Conference: Cultural Educators in Europe – Development of a new profe...
Scroll to top