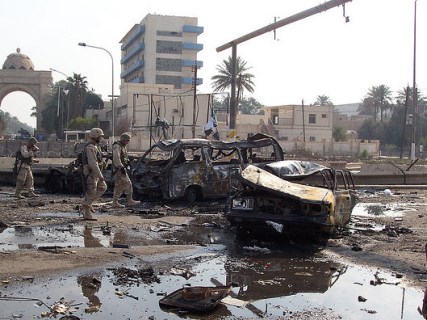 About crying and laughing

It must have been something big that happened. More than 50 heads of states who in another situation wouldn’t have feared open confrontation, stood side by side with each other while staging unity against terror. Separated from the state leaders another 1,5 million people demonstrated their „unité nationale“.

But what is the difference between daily news about deadly terror attacks in Arab countries and the strike in the heart of Paris? And when did we get used to horror from Eastern Ukraine where – in the meanwhile – more than 5000 people have lost their lives?

I don’t want to believe that it is again the different value of a person’s life in the West or somewhere else which makes the difference. That would make the “je-suis-charlie” movement nothing more than part of Western beliefs in its own supremacy. Therefore, it must be the geographic distance which makes a difference. However, the outcry against the murder of the Charlie Hebdo journalists was huge, whereas it required an intervention of the Israeli community in order to point out that also customers of the kosher supermarket have been among the victims of the Paris attacks.

A lot of important perspectives and insights have been given about the Paris attacks (for instance from Zygmunt Baumann or Michael Walzer.  The main consequence is expected to be a continuous increase of the surveillance in European societies as a response to medially evoked security needs among the population (see for instance the hastily adopted security package by the Austrian Ministry of Interior). By these means it will be even less difficult for the Parisian heads of states to put the principle of preventive limitations to freedom over the principle of freedom itself.

Talking about freedom of speech, one can observe politicians of all traditions in emphasising the importance and freedom of the satirical. Even the most conservative thereby refer to the journalist and author Kurt Tucholsky, who allegedly answered to the question of what satire is by saying –  “everything”. I don’t know if he anticipated the inhuman cartoons of the national socialist magazine “Der Stürmer” when saying this. But the students I have discussed the topic with seemed very surprised when realising in which direction the(ir) plea for freedom of speech can go (reminder: the actor Hubsi Kramer was arrested when caricating and appearing as Hitler at the Viennese Opernball in 2000.

Are artists standing above?

In an article in the Süddeutsche Zeitung from 23 January, Andreas Zielcke asks “Was soll Satire? Was soll sie?“. He questions the demand for unlimited liberality, specifically in the arts.  He thereby refers to artistic autonomy which declares the absolute freedom of imagination and the (verbal) expression as an imperative necessity. According to authors such as Salman Rushdie it should even be the duty of artists to radically and subversively undermine power and authority. This would help to bring power to the truth. But shouldn’t this production of truth also be able to be questioned since it runs danger to leave the author/artist unassailable? As free as the author/artist should be in undermining the powerful, shouldn’t he also be accountable and liable for his words and pictures?

Caricatures as acts in a social environment

If we understand caricatures as acts in a social environment, we cannot deny the fact that the production of cartoons brings above the necessity to take responsibility for ones messages and possible outcomes. By these means and according to Zielcke, every satirical representation of the social situation disposes of ethical content.

This doubt of the irresponsibility of artistic production in no way justifies the murder of journalists. But it forces to think about the role of art not only in questioning power but also creating it. It is part of the social construction of what we call our identity and part of the construction of the corresponding “other”. We thereby face the unsolvable dilemma in which the demand of artistic autonomy remains connected to its social context which defines the ways and mode if its realisation. This does not have to lead to an erosion of western, secular lifeforms by the infiltration of Islamist ideas (as the philosopher Rudolf Burger has indicated in an interview with the Wiener Zeitung on 23. Jänner 2015 and for which Michel Houellebecq has provided a literary draft in his most recent novel). It could also indicate that artists, more than up till now understand themselves as participants of a social dialogue, democratic discourses which provide room for participation as well as responsibility. The precondition for such a dialogues is not the obsession with composing the own but rather an interest about the other.

Laughing as a means to confront the own inadequacy

Actually, I wanted write about laughing in this blog. After all, a good caricature stands out by the fact that we want to laugh about it. However, the ability to laugh is a difficult thing. In order to laugh a specific mixture of strength and weakness is needed. Probably, the only ones who can laugh out loud are the ones having the ability to confront daily difficulties and challenges with cheerful serenity. We are far from such ability after the attacks in Paris. However, we will not find a way out of the crisis without the laughing confidence of caricatures which shows us other, but especially our own inadequacies.

When politics were still a fight for a better future

During these days I have looked at the trilogy “Wie eine Träne im Ozean” by Manes Sperber again. On more than a thousand pages the Austrian-French author, social psychologist and philosopher from Eastern Galicia writes about his disappointment in uncovering the communist Sowjet regime. With the help of a range of characters the importance of the political becomes which subordinates everything else becomes obvious. The characters are prepared to unconditionally fight for their political beliefs, if necessary to die for them. While reading the novel I was struck by the insight that politics and the pursuit of a better society is the determining life-cause for the characters. And yes, their belief for the right cause included killing the enemy in a heroic fight. It is part of the great European myths after the Word War II and gain after the end of the Cold War that at least this continent heroic fights have come to an end (the Balkan wars of the 1990ies being a the exception to the rule). This myth was based on the political deal to bury the hatchet of the class struggle and to avoid social inequalities. 70 years later it seems that this political deal has been revoked. Studies reveal increasing global inequality, taking away the belief of many for a better future. From European suburbs despair is reported which reminds us on the hopelessness of the postwar period.

Losing the political is the triumph of the religious

In comparison to that time no fight of political beliefs seems to develop today. The current political leadership does not even try to design a better tomorrow; it already fails at today’s challenges. The only beneficiary of the “postheroic era” is the populist right, profiting from simplified accusations while the European left is trapped in the domination of the “market”.

This political vacuum wants to be filled, from inside or from outside. And if I try to walk in the shoes of a deprived youngster from the Parisians banlieu who does not have anything to lose, I can understand his readiness to believe in any kind of perspective as long as he can take my faith in my own hands. But if this thesis is comprehensible, the Paris attacks are not about the future of caricature but rather issues of class struggle which is fought along religious lines rather than political.

Slavoj Zizek pointed at the need for the European left to finally provide political alternatives to these challenges – otherwise there is no need to even start talking about liberal demands of artists. The consequences of the political decision in Greece will show if the message has been understood.

Evaluation of kulturen in bewegung
Scroll to top