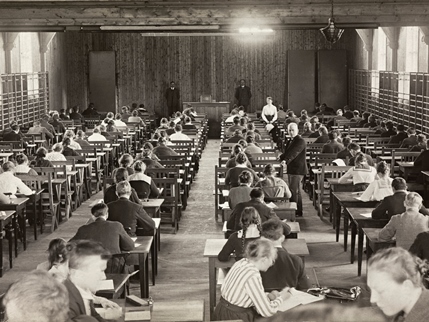 A few days ago, my daughter took the enrolment test at the University of Vienna. Her report reminded me of the impressions I got from watching Erwin Wagenhofer’s documentary “Alphabet” on the handling of pupils in a mass education camp somewhere in China. The private company hired by the University of Vienna applied military-style organization, meaning that the applicants had to line up and follow detailed rules on the dress code and the use of writing devices. Everything seemed to follow a standardized procedure: the explanation on how to fill in the multiple choice test took about an hour, leaving the premises (a hall usually used for exhibitions) was impossible due to locked doors. Eventually, fewer applicants than expected turned up and everyone (except for one guy who was too dilettantish in cheating) got the study permission.

My daughter kept cool during the procedure and yet she was somewhat irritated: this cannot be true. This is how the university presents itself to its future students? Obviously, the strictly standardized procedure challenged her expectations into higher education as a place for creative thinking and doing. “Is this the right place for me?” was the question that bothered her the most.

In his latest pamphlet „The panoptic school“ the youth culture researcher Bernhard Heinzlmaier describes an effective realignment of education institutions towards transparency and control, conformity and uniformity. In this context, the test setting applied by the University of Vienna appears less as a pragmatic means of assessing the knowledge of large groups of people than as a way of checking their ability to function within a defined system.

Probably, not even the organizers of this test procedure believed that this would be an appropriate means to identify the best candidates, willing to depart on an intense learning journey within a specific field. Instead, the test checked an – according to Heinzlmaier – “adaptive-pragmatic knowledge” determining the individual’s ability to adjust to a given system, defined less and less by the content than by the methods of dealing with the system itself. The likely result: conformity becomes the institutional mission. This implies the “production of an adaptive, economically thinking and usable human being, functioning within a defined system, lacking any visionary outlooks on life.”

This analysis is supported by the finding that the young people themselves did not rebel against the “inhuman” testing procedure. They calmly underwent the procedure. For Heinzlmaier, this would be yet another proof of his argument that “the young generation is largely unable to cope with life in an autonomous way”. On the one hand, so Heinzlmaier, the youth follows the strategy “success by adaption” in given paths. On the other hand, young people are unable to take on responsibility for their own actions.”

Do the decision-makers know what they are doing to the next generation?

I think to blame the young people themselves would be a big mistake. This would add to the generation conflict, and it would also ignore the fact that the decision-makers as representatives of the older generations themselves have constructed this conformity pressure now influencing the young people’s attitudes and behavior. It seems as if the people responsible for this system use an infamous and ambiguous message in order to implement the conformity program: full-throated talks about the growing individualization and the need of creativity stress that only by using the human ability to think and act in a creative way, prosperity and affluence could be guaranteed (that these paeans of praise to creativity have reached a status of boredom and conformity could be witnessed at the Gala of the Ars Electronica in Linz).

This pretense is sustained by special programs on cultural and creative education that can be regarded as alibi-measures to enlighten the institutional constraints with creative fireworks. But, talking about the real core of the matter in school and education development, it becomes clear that the road leads to standardization. Anything that cannot be assessed and compared by numbers remains underdeveloped, leading to a subsequent loss of anything that education used to be about, once upon a time.

To be competent used to be a complement

This trend became visible also during the EDUCULT project „Learning with, in and through culture“ involving middle schools and cultural institutions (https://educult.at/en/featured/lernen-in-mit-und-durch-kultur/ ). The project dealt with „cultural competences“. We noticed that the term „competences“ is meanwhile rejected by teachers as a more or less rigid tool imposed by education bureaucracy instead of being regarded as a holistic complex of human knowledge, skills and attitudes. It took two years for the project group to critically deconstruct this image and reacquire a concept of an autonomous education with cultural means – without providing a sufficient answer to the question how this could be applied in regular education settings.

Although focusing on participative, research based learning methods, the project was not fully able to breakthrough a „school mode“, determining that learning is an adaptive-pragmatic behavior of successfully, swiftly and unobtrusively completing given tasks without using individual creative potentials. It took some intense project meetings, patience and diligence to activate curiosity, talent and self-initiative as individual treasures hidden by the performance expectations that are dominating schools. The expectations recall Michel Foucault’s thesis on the internalization of power, conditioning our behavior.

The numbers speak for themselves: we have accepted not to say anything

From a different perspective, the literary critic of Die Zeit Iris Radisch has recently discussed this development. Under the header “The normal null-text – the present chattering is ruled by a ban on thinking and a diffuse climate of obsessive self-elation” () she recounts the internalization of power structures. In the past, authoritarian institutions such as church, parties or other “mighty controllers” defined what could or could not be said, where and by whom. This octroy could be resisted against and there were niches of unaddressed communication where it was possible to say everything. Today, the rules of talk are, so Radisch, not be made by external institutions but by internal, voluntary self-censorship. In consequence, it is not sufficient to comply with external rules of talk – you have to fully approve them. “The new age wants the full human, his comprehensive compliance”. Radisch relates to the philosopher Byung-Chul Han who mentions a “hyperactivity of the obsessive consent with oneself”.

To some extent, Radisch discusses the effects of a “panoptic school” as outlined by Heinzlmaier, whose deformation power we can observe among ourselves: the public has been narrowed down by the communication of a “normal null-text” being talked automatically. The “real content” would be communicated in the seemingly private atmosphere of digital communication. The result would be “an arbitrary garbage collection of talking and thinking of a universal idiocy of employees, reaching up to the highest circles of society, not interested in anything but the own career”. The argument that this would be the result of an education based on individualization and creativity is rather weak.

It is easy to realize that the political decision-makers have been seduced to use this „normal null-text“ in order to conceal their own lack of perspectives – with severe consequences for the political culture. It is mainly the representatives of right-wing parties who claim to oppose this “policy speech” with “courage and genuine truth”, serving the public craving for strong statements (not yet turned into actions, at least in Austria).

But also the art world’s desire for a “real world behind the idle talk” gains strength. The longing for the “cold air of the outer world”, real contact, real life is highly visible. This longing is also displayed in the unexpected helpfulness that the refugees currently crossing Europe encounter.

The fatigue created by the ruling, “politically correct” and unsubstantial public climate must be great as so many people dare to set out to the real life, where encounters with people with real problems are possible and where one can feel oneself deeply touched by doing something good, something useful. It seems as if we do not only observe an impressive helpfulness but also a mutual satisfaction, with the helpers being greedy for direct human experience and the refugees being greedy for protection.

This mass outbreak of humanity has led some politicians in Europe to try some plain text statements (without making their intentions fully transparent). They have created a basis for a new quality of political controversy in Europe. Who is going to win this game is not clear. There are voices who argue that the lack of political and institutional conditions to sustain the spontaneous civil society activities should tame the collective euphoria.

In the meantime, I hope that my daughter does not take her first impression of university too serious. Yes, it is correct that Austria and even the country’s huge debts are grasped by the current wave of anti-intellectual conformity supported by numbers (have a look at Collin Crouch’s “The Knowledge Corrupters”.

What maintains is the responsibility to resist.